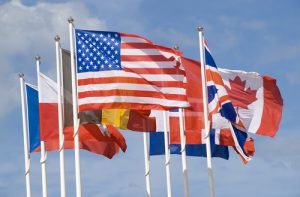 Since the birth of social networking phenomena such as Facebook, Twitter and the currently booming Google+, even the most antiquated or small fry businesses can implement social networking strategies to get their messages out there with few barriers.

International PR and marketing via social media can be extremely beneficial, not only for promoting of your business, but for feedback from customers as well. And if you’re a business who’s exporting internationally via translated websites, then having a supplementary social media presence for each of your target markets is absolutely essential.

1) Social media around the world

Most of the social media platforms have different uses. In the beginning (or at least acting as a catalyst for the subsequent hype wave) was MySpace, which has now been almost exclusively adopted by the music industry. When Facebook took over, people used it to share news, views and photos with friends and family, and even track down long-lost people – and with its current capacity to support 72 languages, it’s understandable why Facebook has become the international social giant (although with 42 languages supported at present, Google+ is close on its heels).

As for Twitter, this still-strong social media platform is immensely popular with the tech and journalism industries, and is famously used by celebrities and politicians to get their opinions across to their followers in bite-sized snippets.

Of course, these are just the main Western platforms; there are numerous other social media sites across the world, with their own primary uses. Sonico and Orkut are huge in Latin America, and in Japan there are over 30m users of Mixi. Qzone and Renren dominate China, each having hundreds of millions of users.

You should only target platforms for those countries in which you’ll have either an ecommerce or on-the-ground presence. So, for instance, if you’re launching an ecommerce site for the French market (in France), the German market (in Germany) and the Spanish market (in Spain), you’ll need a social media presence across networks for each of those countries, but not for French-speaking Canada, German speaking Austria or Spanish speaking Mexico.

Whichever platforms you end up targeting, the key to success on foreign social media is research, know what people primarily use them for.

2) Making best use of the different platforms

It’s worth doing research into what people in each country use each network for, and their general activity on social media. Brazilians, for instance, are among the world’s biggest social media users, with one in four Brazilians spending, on average, four to eight hours on social media each month. It’s a fairly specific demographic, too – 80% are male and half of all Orkut users are under 25.

The key to success with Orkut is to recognise that its users are resistant to direct advertising – indeed, Google had to withdraw its plans to introduce targeted advertising to the platform in 2007. Your best bet is to aim for that illusive marketing goal – a viral or grassroots campaign.

Orkut is also popular in India, where they have a fondness for social media platforms based around online games and sharing music, like Ibibo. Meanwhile, in China, the main social networks can be broken down into handy demographics: Qzone is popular with teens and casual social media users; Renren is primarily used by university students; while Kaixin001 is popular with office workers.

3) One size doesn’t fit all

When you’re looking at launching international social media campaigns, it can be tempting to think that one campaign should do for one language. For instance, a Facebook page in English should suffice for the USA, Canada, the UK, Australia, and other native English-speaking countries, right?

Unfortunately, this isn’t always the case, for a number of reasons:

Cultural and social differences
If you have a website where the shopping and payment system is designed for the US market, you won’t get any conversions from the UK or Australia, because the site just isn’t designed around their currency, address formatting, preferred payment systems, etc. The same goes for social media profiles – the small local details can make all the difference between a successful profile and a flop.

Linguistic differences
This is especially pertinent when it comes to the keywords of your campaigns. For instance, in Spanish (Spain), a computer is an ‘ordinador’, while in Spanish (Latin America) it’s a ‘computadora’.

Relevance
You want to target your content directly at the interests of your fans and followers. So, for instance, if you’re setting up a German Twitter account with the aim of engaging German-speaking Twitter users with news-worthy links, notes, contest and comments, then the majority of your content will only be relevant to people in Germany, as it will be linked to events specific to Germany. If you want to properly engage followers in Austria and German-speaking Switzerland, you might need specific Twitter accounts for those countries as well, with localized content.

The big brands, like Coke, Nike and McDonalds, know that marketing campaigns need to be localized for each country. The same goes for social media – the good news is that, thanks to social media’s low investment costs, localized international campaigns are accessible for businesses of all sizes.

As well as asking yourself what networks people use, you should also look at when they use them and how. In terms of volume, for example, Brazilians are prolific bloggers, and Australia and the US are social media mad across the board.

Talking about timing, most people access social media sites during office down time – first thing in the morning, at lunchtime and during the ‘attention crash’ phase in mid afternoon. Your messages are more likely to be seen if you target at these times.

When it comes to the kinds of devices people use, this will also help you to choose your social media avenues. For example, most people in Asia access social media on the go, through hand held devices.

5) What are you trying to say?

Think about your brand, think about what you want to say, and make sure you keep it interesting. Of course, you want to keep things relevant and easy to understand. We live in a world where people want instant, bite-sized chunks of information, so keep it concise. More importantly, the key to social media is to be interactive – don’t just blast your fans and followers with marketing guff – interact with them, and encourage them to ask your brand questions.

6) How to keep your audience

As well as the above points, make sure you keep your followers by sticking to certain communicative rules. Keep to legendary linguist Grice’s age old maxims of quantity (not too much, not too little), quality (good, informative and, if appropriate, entertaining) and relevance (keep to the task in hand).

It’s also important to keep cultural differences in mind when it comes to your social media presence. For instance, in China, government censorship could impact your marketing campaigns – there is a list of banned keywords which could see your content being blocked.

Furthermore, Chinese web users are huge fans of free downloads of music and movies, as well as online games – dominant search engine Baidu’s search analytics show that the majority of traffic is for free (often illegal) downloads, so you’d likely do well with a multimedia campaign linked to free downloads.

It’s also interesting to note that the Japanese are more prepared to pay for quality online content than other cultures, while Germans are very concerned about their privacy and data security when it comes to social networks.

There are many resources out there online that can help you to get an understanding of the cultural quirks in social media use in different countries, such as Econsultancy’s Social Media and Online PR Report 2010.

7) Getting your head around localization

A lot of the primary research and preparation for your social media campaigns you can conduct by yourself, even if you’re only multilingual. There’s a lot of content online about social media habits internationally, and using tools like Google Translate, you can have a poke around foreign language social networks and get an idea of what they’re used for.

You can also re-use a lot of your English language content across different languages. Duplicate content rules don’t apply across languages, so if you have a blog post or video in English that can be translated or re-dubbed and still be relevant to people in other countries, then fire right ahead.

Before you launch, though, you’ll definitely want to bring some local native-speaking voices and/or social media experts in as your consultants, copywriters and social media managers to make sure you’re hitting the right mark.

Machine translation tools like Google Translate are great for getting the gist of messages in other languages, but they’re nowhere near reliable enough for marketing collateral. Your best bet is to hire social media managers for each of your target countries to manage the production and distribution of content, and the interaction with fans and followers, in their native language.

Try the online freelancer and translation communities for outsourcing opportunities, and with a small team on board you can tackle campaigns across any international social media networks with aplomb.

Are you considering taking your social media international? Have you already done so and learned some lessons along the way?

← Forget the Tools: Taking the Sheen off Google Plus 11 Places To Find Content Your Community Will +1 →