Will Snapchat Discover A Business Model?

Ever since he turned down a cool $3 Billion from Facebook, Evan Spiegel has been on a mission to prove his ephemeral messaging app isn’t going to disappear any time soon.

Like millions of teens, along with many marketers and journalists, I don’t believe Snapchat is a flash in the pan.

Their growth over the last year has put them on par with Twitter and Instagram for monthly active users. But the clock is ticking for the ephemeral messaging app to prove a now $19 Billion valuation.

Snapchat is in a similar position to Facebook circa 2008, when Zuckerberg’s flagship brand crossed the 100 million user mark. At that milestone, it’s clear that both services had gone mainstream, but it doesn’t mean that either had a clear business model.

That difference is vital to driving long term value for Snapchat.

Let’s take a look at the features Snapchat has launched over the last year, some of which they’ve attempted to actually monetize.

Originally called Our Story (first launched at Electric Daisy Festival in 2014), Live Story is a curation of user snaps around an event or “day in the life” story. This feature has seen biggest growth in terms of user engagement. In fact, they are now posting 2-5 stories a day.

A simple, fun way for users to swipe right and add a branded sticker to their snaps. Earlier this summer they revealed plans to start charging brands for geo-filters.

Essentially :15 second mobile video ads that marketers could insert into Snapchat users feeds. As of April ’15, this ad unit is no longer available. Sorry advertisers, you missed your opportunity to throw dollars at this one.

Launched with little fan fare, beyond this snazzy video. I dare you to name one person who has set up, let alone actually sent money via this service.

Media section of (mostly) recycled digital content from a handful of publishers like CNN, Vice, ESPN, and Comedy Central. In the 9 months this section has been live, Snapchat has continued to mix up publishers and placement of this section within the app. Most recently BuzzFeed & Mashable have signed on.

Replays, the ability to re-watch one precious snap per day, first rolled out in late 2013. But Snapchat recently updated this feature to allow users to replay up to 20 snaps a day for $4.99. Teens are now forced to choose between a Fiery Doritos Locos combo or replays on Snapchat. Tough decision.

Launched with the same update as Replays, this one seems more up Snapchat’s alley. Now users can animate their selfies giving them a strange, er artistic, look. Lenses is sort of the 2015 version of geo-filters. This one has brand integration written all over it. My guess is they’ll test branded lenses with an upcoming film release. 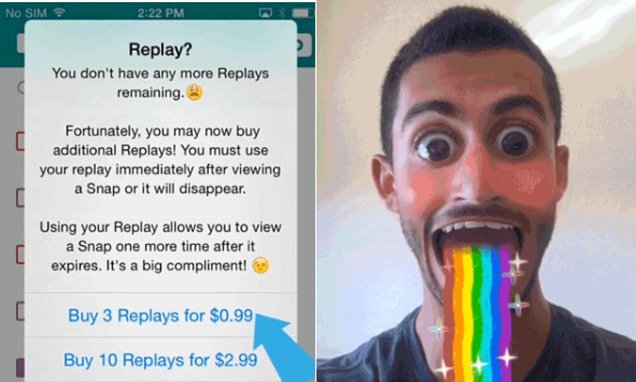 So what does this all mean?  Snapchat has no shortage of new products & features and I certainly applaud them for their speed of innovation. That said, Evan didn’t turn down multiple buy bids for nothing. And the fact remains that with over $1B raised, investors are chomping at the bit to get paid.

Of all of the product launches we’ve seen over the last couple years, the one with the biggest potential for capturing brand dollars is Live Stories. That’s why Snapchat is expanding their news/editorial team, including hiring CNN’s Peter Hamby. This is the team that curates live events happening around the world every day.

From music festivals like Electric Daisy Carnival to sports tournaments and even political rallies, Snapchat is poised to bring crowd sourced journalism to the masses unlike any other company (sans Twitter). Although Snapchat doesn’t release MAU numbers, the latest estimate pegs their community at around 200 Million users globally. Not too shabby!

Live Stories reportedly draws an audience of 20-40 Million viewers in a 24 hour window. Although completely un-targeted, that’s a big enough pie that marketers (especially those targeting young Millennials) are salivating at the thought of engaging them in the same app they use to chat with their BFFs.

Snapchat is offering up ad spots to brands who want to sponsor one of the handful of Live Stories each day. Imagine Red Bull sponsoring EDC’s story or Nike inserting a branded snap into the NBA Finals story. Although they are just beginning to tap this well of the world’s largest brands, the potential is huge.

Note: Snapchat splits ad revenue with publishers within their Discover section and are beginning to roll out branded geo-filters more broadly. Both are making money, but the significance of those revenue streams remains to be seen.

Brands & Consumers, Sitting In A Tree

The trick for Snapchat with adding ad products (or any new feature for that matter) will be striking the right balance between staying relevant to their fickle teen-centric audience while mixing in marketer messages that don’t feel gimmicky or forced.

It’s like Sean Parker said in “The Social Network”…

Time will tell how Snapchat’s monetization efforts pan out. Will they  manage to grow their ad coffers while attracting an even larger and more diverse user base? If not, one day we’ll all reminisce about a time when we sent disappearing photos to one another.

What do you think…has Snapchat finally found their footing with an ad business that works for both consumers and brands, or not so much?  Cast your vote in the poll below.