A new study released today measuring Facebook trends among various nonprofits – including the Planned Parenthood Federation of America, AARP, US Fund for UNICEF, and the Humane Society of the United States – revealed that animals are at the top of the food chain among Facebook’s nonprofit fan pages.

Overall, Facebook audience growth among nonprofits soared 70 percent last year but nonprofits in the wildlife and animal welfare sector reported on average that they had 129 percent more fans by the end of 2011 than the beginning. 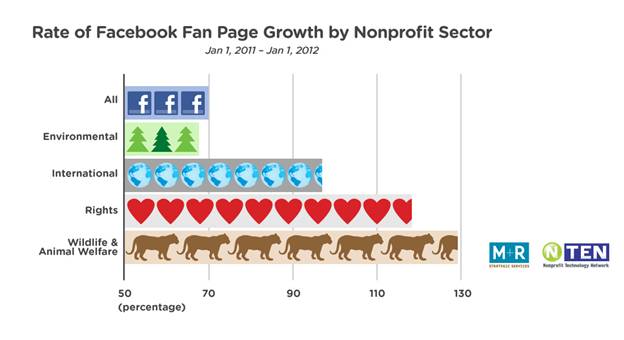 “Never underestimate the power of a puppy photo,” said Sarah DiJulio, Principal at M+R Strategic Services. “Even while reports show people reducing their number of friends on Facebook, we saw an explosion of people following all types of nonprofits they care about in 2011.”

Other results of the Benchmarks Extra: Facebook study conducted by M+R Strategic Services and NTEN include:

“We’re moving beyond the ‘try it and see what happens’ stage of social media usage and into the data-driven execution of campaigns and strategies stage,” said Holly Ross, Executive Director of NTEN. “Resources like this are helping nonprofits get to that stage.”

← Being Responsive Gains Twitter Followers: And Other Lessons from @GaryVee's Twitter Data Content Marketing Is Not As Simple As Writing A Ton of Blog Posts Every Day →