Brands Increase Their Focus on Twitter for Customer Service [REPORT]

Social media can do great things for brands; it connects them with their consumer base, allows for two-way communication and spreads news faster than any other platform.

It puts a lot of power into the hands of the (occasionally disgruntled) consumer.

With a lack of customer service, Twitter becomes a place where brand reputation goes to die. Luckily, brands that are owning their social reputation can take advantage of the outlet, and many are choosing to.

Simply Measured has released a study on brands utilizing Twitter for customer service outreach, a trend that they say has been growing since their first look in September 2012.

“For the third straight quarter, demand for customer service on Twitter has grown alongside increased brand investment of responsiveness.” –Customer Service: What’s Working on Twitter by Simply Measured

And a wise investment that is! According to this infographic by Zendesk, customers are more likely to share a bad experience than a good one. Beyond that, the negative impacts of a bad customer experience have more longevity than positivity surrounding a good one.

The Impact of Customer Service via Zendesk

As Simply Measured found, Twitter customer service can become such a monumental task for large brands that it requires a social channel all it’s own. This study found that 32% of the Top 100 Interbrand Brands now have dedicated customer service Twitter handles.

This is the difference between @Nike and @NikeSupport, for example.

The latter assures those on the Twittersphere that the brand is there for them: “We’re listening. Seven days a week.” 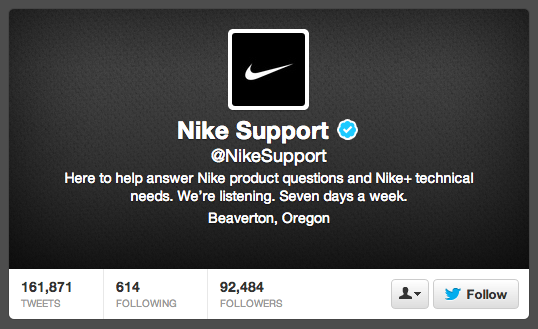 The strategies for approaching customer service on Twitter differ among the top brands, sometimes directing users to the company’s website and sometimes requesting more information. However, the true benefit exists in the direct, two-way channel of communication. This presents a rare opportunity for both brand and consumer.

Customer service handles then work in tandem with other company outlets, requesting that consumers call or email the appropriate representative. By monitoring unsolicited customer service activity on Twitter, brands are able to attempt to move the conversation to a more neutral platform.

Simply Measured used the factors of average response rate and average response time to differentiate the top contenders. In doing so, they placed brands like Microsoft, American Express and eBay among their top ten, as shown below.

Awareness of the customer service channels is not very important. The Nike Support handle has only 1/17th of @Nike’s following.

Yet, Nike was recognized by Simply Measured as one of the top brands doing Twitter customer service right with a response rate of 73%. (I’d venture to guess that this beats your personal response rate!) This goes to show that one-to-one interaction is the true essence of this investment.

Which makes sense, seeing that a major benefit of social interaction is the personification of otherwise corporate brands. UPS capitalizes on this advantage.

They literally use the social network to put a face to a name. The left panel of the @UPSHelp Twitter profile shows fellow tweeters who they are interacting with. Each tweet is even signed with the initials of the employee addressing that customer.

Twitter customer service doesn’t help brands to solve the issue at hand. Despite this, the engagement has several important benefits. Most importantly, this tactic allows brands to become a part of the conversation and gives them an opportunity to neutralize or, at the very least, address negative comments across the Twittersphere.

With impressive findings such as these, I’m interested to see if a future Simply Measured study reports a continued growth trend in Twitter customer service interaction.

Until then, I’m off to hassle @United (see: results for @United).

Speaking of a brand that could use a social facelift, know of any other infamous Twitter corporate victims that could benefit from a stronger  social customer service strategy?