Tweeting the Friendly (And Unfriendly) Skies

It only takes one. One negative interaction with just one customer and you can quickly find your brand or company playing the starring role in the next YouTube sensation. A role you sadly will not enjoy. People are tweeting, blogging, and yes even creating videos documenting their interactions with companies and brands. Airlines are certainly no different. Just ask @SouthwestAir about what happens when a customer is asked to disembark the plane because he’s too large to fit in a single seat. 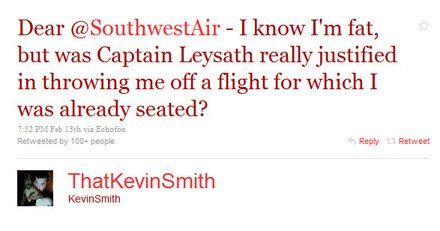 Or perhaps @Continental can share with you the negative consequences of leaving a plane on a tarmac overnight…with passengers aboard! And let’s not forget @UnitedAirlines inspiring a group of struggling musicians to create a series of music videos (racking up tens of millions of views) slamming the airline: Ouch! Good luck trying to counteract that sort of negative PR through brand messaging and advertising. That’s like trying to douse a house fire with your kid’s SuperSoaker 1000. What are airlines to do in today’s hyper-connected, status update worthy kind of world? In a word: engage. Brands must move beyond the tired strategy of solely pushing out PR type messages through Social Media Channels. Social Media is about real time conversation. The more social media savvy brands understand that fact. There are several airlines that do more than just talk. They listen. They respond. They engage. In short, they put the “social” in social media. Here are several that are using Twitter better than most: @JetBlue – In addition to their main Twitter account, the airline launched @JetBlueCheeps which announces great deals on last minute flights every Tuesday. They fill seats, we get good deals. Win win. @SouthwestAir – Their PR team is fully engaged in the social space (Blog, Facebook, YouTube, etc) And just like their helpful & comedic flight attendants, they tweet with flare. @AlaskaAir – Not the largest Twitter account on the list (in terms of followers), but these guys kill it in their response ratio. I count about a 6:1 reply to tweet ratio. Kudos! @VirginAmerica – A healthy mix of deals, PR updates, and tweets to help “make flying good again.” Here’s to more announcements (and routes) from Sir Richard’s US based airline. @AAirwaves – Not only do they listen, but American Airlines will even help you track down your lost luggage. Now that’s commitment. @Continental – These guys aren’t afraid to engage upset customers directly. Case in point:

For a more complete list: Airlines on Twitter All of these airlines understand one simple principle: the customer is in control. Twitter, Facebook, blog, et al are just tools for brands to connect with their customers in brand new ways. And those connections are a two way street. Social Media is a platform. Just as that platform gives you and I a voice, it also allows companies the chance to have a voice in the conversation. It’s up to them whether they take advantage of that opportunity or not. If the Kevin Smith incident had happened a couple years ago, imagine how Southwest would have responded? Mainstream media would have told the story, with help Kevin Smith of course, and Southwest wouldn’t have had much a chance to respond (at least not where anyone would have heard them.) But thanks to their extensive presence in Social Media, they were able to respond in kind…immediately on Twitter. And their loyal customers chimed in. In fact many of their fans even chimed in on their corporate blog adding that they supported the company’s policy and handling of the situation. What do you think? Have you had any positive or negative experiences with an airline recently and reached out to them on Twitter? If so, how did they respond? Let us know in the comments below.]]>