The Importance of Being Awesome 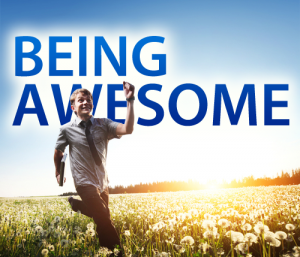 Did you know awesome used to mean the same thing as terrible?

In the etymological history of the words, both were used interchangeably to describe the presence of God – something that inspired awe or terror.

It is in this archaic sense that awesomeness is important for brands, media and people because of a fundamental shift in the nature of the mediascape.

Moore’s Law’s is now the driving force of change in media.

Moore’s Law is, in fact, more a trend of hardware computing history. Gordon Moore, the founder of Intel, described in a 1965 paper how the amount of  transistors we can squeeze on to an integrated circuit board doubles roughly every two years, as the cost halves.

This in turn means computers get faster and cheaper, and memory gets cheaper as well.

This tendency to exponentiate is the biggest driver of change in your world and it’s really, really weird.

Nothing else changes like this. Cars don’t get twice as fast and half as expensive every two years. Neither do refrigerators. In fact, nothing does except computers.

And now media, because ever since media became digital and therefore a function of memory, the amount of available media bandwidth is a function of Moore’s Law.

Then there is social

Now, with the internet, we have, essentially, infinite media space.

And, practically, infinite amounts of content, thanks to that media we call social.

Previously, the ability to make things public, to publish, was a privileged act.

Only governments, the media-industrial complex, and advertisers, could really do it.

Now, everyone is making content and culture all the time, which presents new kinds of challenges – how do you get any attention in an infinite space?

Awesomeness is the answer. 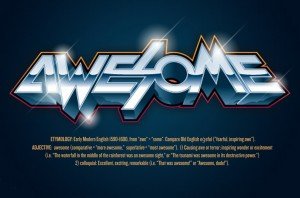 We are in a stage of transition, where human interpersonal networks are going to supplement or substitute commercial broadcast networks.

As professor Henry Jenkins says in his upcoming book: “if it doesn’t spread, its dead.”

Media products act like solidarity goods – a permanent economic class of goods that become more valuable the more they are consumed. So, if no one sees it, it’s not worth anything. The more it spreads, the more eyeballs it accrues, the more its worth.

And, thanks to Facebook’s Edgerank algorithm, if content isn’t shared, it may not get seen much at all in people’s newsfeeds.

It turns out awesomeness is the single biggest driver of sharing.

Studies done by the New York Times show that the most shared articles on their site are ones that inspire awe.

Specifically, things that are epic in scope and require “mental accommodation by forcing the reader to view the world in a different way.”

“Emotion in general leads to transmission, and awe is quite a strong emotion,” he said. “If I’ve just read this story that changes the way I understand the world and myself, I want to talk to others about what it means. I want to proselytize and share the feeling of awe.”

It’s the same driver that made early hominids that encountered the aurora borealis burning in the sky run to find someone to show it too.

“Behavior is motivation filtered through opportunity”.

The motivation to share awe is ingrained, the opportunities represented by social media are ever increasing.