The Top 17 Social Media Acquisitions of 2013 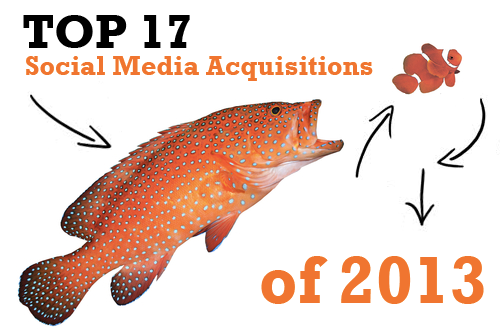 Another year, another several dozen social media acquisitions. How exciting!

Twitter lead the way this year with 7 social media acquisitions. Plus they had that little IPO that really put Facebook’s debacle to shame.

Yahoo was also on a tear this year as Marissa Mayer started to make her mark. Content and mobile were her calling cards. Their big play was buying Tumblr, but several other acquisitions landed Yahoo in the second place spot with six social media acquisitions in 2013.

Facebook was a little quieter this year with 3 adds. While LinkedIn, Pinterest, Google and Salesforce each picked up two new social media companies during the last 12 months.

Salesforce, Oracle and Adobe all continue to slug it out to become THE marketing software behemoth. But as a whole they were quieter in 2013 as most of the key pieces for all their marketing clouds have been built out.

Let’s dive in to our top 17 and why we think each of them were a big deal for the social media industry.

Yahoo brought in a major social network with Tumblr, with a young audience of content creators and curators. And they promised “not to screw it up.” Marissa Mayer certainly has plans for Yahoo to expand their already massive content offering. Tumblr will be a way to both expand their content and expose Yahoo content to a new and larger audience.

If they can not screw it up.

Twitter bought a lot this year. Their M&A funds jumped this year to 8X what they spent in 2012.

Salesforce continues to build their marketing software juggernaut, one strategic piece at a time. This was a big one as ExactTarget was becoming a min-Salesforce of its own. Salesforce got a ton of software tools, a great marketing team, and a very impressive client list with this buy.

Plus, one of the larger email marketing solutions.

The impact of Apple buying Topsy, one of three Twitter firehose vendors, is really an unknown. Apple has been a big boon for Twitter, integrating the social network into iOS 5 back in 2011.

The potential here is a negative one though. If Topsy shuts down or simply languishes in Apple’s hands, it could mean one of the better Twitter search engines, and a major Twitter data source, becoming less useful to consumers and businesses.

This is pretty simple. Google is good at maps. The best. And now they are better. Of course, this also stopped Facebook or anyone else from getting better at maps.

Plus, Waze has unique social and advertising layers to their service. Google likes both of those layers very much.

Oracle slowed down on their acquisitions a bit this year. They led the way in 2012, with four pickups that helped build out their very robust marketing cloud. Compendium is a very nice addition, as a strong content marketing software.

Compendium made its name as a blogging platform that enables strong SEO benefits. It should play pretty nicely with the rest of Oracle’s marketing software build.

This was actually a 2012 acquisition by Twitter, but since Twitter bought the platform before it ever launched, no one really knew about it until the app launched publicly in January.

I give Twitter, and Vine, a lot of credit for causing some clear disruption this year. Soon after Vine’s launch Instagram launched their own video clone of the product. Both services innovated to provide some great options for consumers and businesses.

Their Nielsen partnership and these acquisitions demonstrate how important the entertainment vertical is to Twitter’s business.

Acquiring Pulse was a very clear move form LinkedIn to expand their content and curation features. In 2013, LinkedIn made a lot of strategic moves. Their native ads got very strong and the homepage got a lot more interesting.

Pulse and LinkedIn’s featuring of business leader content are a big part of the social network’s attempt to bring users back to the site more often.

Facebook made a big pickup here from Microsoft to help build out their ad analytics solutions even more. Facebook ads are Facebook’s revenue. They are not diversified. One of their big challenges is helping businesses understand how to get value from Facebook ads. Enhancing their ad analytics, with Atlas, could help that effort.

I am a big fan of what Storify has done. I think they have driven Twitter and Facebook to improve the curation and embedding tools available on their sites. It will be very interesting to see what Livefyre does with the platform.

Brands (and publishers) need new ways to capture these  social conversations off the major sites so that they can actively engage with them. Livefyre has done a lot of innovative things, starting with their commenting technology. But having seen entire social hubs they built for campaigns like this Fall’s PlayStation 4 launch, they are clearly not content to be a commenting platform only.

Lanyrd is a great conference directory that allows users to crowdsource all event data on the site. It connects speaker pages, event companies, topics and more. They had yet to really monetize. It will be interesting to see how EventBrite uses the service. At a minimum there should be an easy “promote on Lanyrd” premium option added right away.

If I were LinkedIn, I would be looking at Eventbrite as a future potential acquisition.

The “meta” part of this story is that Dispatch‘s founders originally met at a Meetup event. However, Meetup is serious about using the Dispatch technology to improve how the communication tools within their Meetup groups. Dispatch is the anti-reply-all company whose focus is on improving online group collaboration.

Carrot Creative is a quality social media agency in Brooklyn. Most social agencies get bought up by larger Ad or PR agencies. But not Carrot. Teaming up with Vice, a media company, will be an interesting combo. Carrot Creative will help market Vice’s editorial content to larger audiences as well as work with Vice partner brands.

Adobe picked up Neolane to help beef up the automated marketing portion of their marketing suite. Neolane brings with it, to Adobe, the ability to handle lead generation management and manage campaigns across multiple channels.

We also have detailed out a more complete list of social media acquisitions from 2013. All of the above acquisitions are included below as well, in chronological order.

Anything we missed? Add it in the comments.