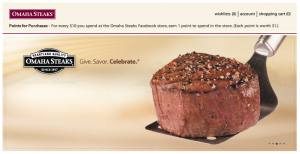 Omaha Steaks is bucking the trend toward Facebook store abandonment and has opened a store to offer fans access to exclusive merchandise, a move that is considered a no-brainer by company senior vice-president Todd Simon.

“I think not having a Facebook store would be kind of like saying we don’t have to have a retail store,” stated Simon in a recent Adweek article. “We sort of held back really getting into this until the technology was there that allowed us to develop a shopping experience around the social platform and really create a social experience as opposed to just trying to rubber stamp out what we’d already been doing in other channels,” he added.

The store, tabbed as “Fan Exclusives,” offers specially-priced merchandise, as well as items that can only be found on Facebook.

Other ways the company attempts to lure fans to purchase products is through badging and points. Users can earn a Steak Lover badge for shopping in the store, a Steak Advocate badge when friends click a shared link that directs to the store or the First Time Buyer badge for an initial purchase said Adweek. And for every $10 worth of merchandise purchased, customers receive 1 point that equals to $1, which they can apply toward their next purchase.

Simon’s understanding that shopping on Facebook requires a different way of thinking is key to the company’s potential for success, as is his willingness to wait until the dust had settled on previous, less successful attempts by other large brands.

Of equal importance to Simon, according to his statement, is having the right technology. For its store, the company chose social commerce platform provider ShopIgniter.

The store is Facebook-inclusive in that the purchase transaction happens inside Facebook rather than pushing customers to Omahasteaks.com. It also makes use of the extended real estate now afforded through the new Timeline format.

There is one point of concern, however.

Rather than view social media as a “channel,” it’s much better to see is as a “layer.” Integrating the two sites to enable social sharing between both the .com and Facebook, something Facebook’s Open Graph certainly facilitates, makes sense.

But, rather than rain on Omaha Steaks’ parade, I’ll refrain from judgment until some numbers are reported. The use of exclusive merchandise, combined with incentives in the form of rewards points and gamification techniques such as a badging are certainly steps in the right direction.

← If more events used text messaging, we would all be happier 5 Key Benefits Of Social Customer Service →