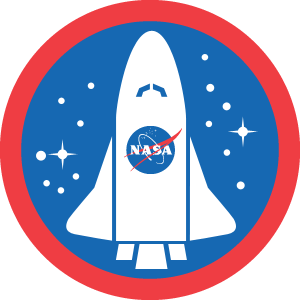 Are you struggling to get approval for social initiatives?

Trying to navigate red tape so you can partner with Foursquare or Gowalla?

Well, if Stephanie Schierholz can do it, you can too.

Since NASA is a huge government agency, Stephanie has to deal with a lot of red tape. NASA has to negotiate their own Terms of Service (TOS) agreement with each social network.

Despite bureaucracy and limited resources (Stephanie isn’t just NASA’s social media manager, she’s also the Public Affairs Specialist for NASA’s Office of Communications), NASA is very active in social media, with more than 250 accounts agency-wide. About 130 of those are on Twitter, about 20 of which are astronauts. They also have more than 50 Facebook pages.

Stephanie recently spoke at Social Media World Forum in New York City and shared some of the secrets of NASA’s social media success.

“Just do it”, Schierholz says. “Don’t waste any more time. You learn by doing. Look for those who are doing it well and see what you can copy and apply.”

2. Build a Hub for Your Networks

NASA maintains over 250 accounts agency-wide for various departments, missions and programs, but they link to all of them via a central hub at http://www.nasa.gov/connect. This hub makes it easy for fans to find and follow exactly what they’re looking for:

Many brands try hard to maintain one consistent voice online. NASA does the opposite, giving different perspectives from across the agency, from the NASA administrator to the astronauts to the web team “Behind the Page”.

5. Bring your tribe inside

NASA works hard to digitally and physically bring their tribe inside, allowing them to share in important moments and experiences. 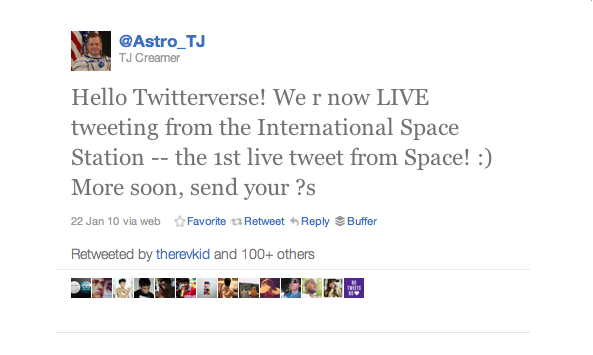 NASA held their first chat on December 21st from 12-5 a.m. ET. The chat room was at capacity (250) within 5 minutes of launch until 4:30 a.m. 3,208 questions were received and 2,393 were answered. Overall, 3,174 people participated in the chat. NASA now hosts multiple live chats on various topics every week.

Host an out of this world Tweetup

The most successful component of NASA’s social media strategy has been their legendary tweetups. They bring together people who follow NASA on Twitter in real life to meet each other and get a “backstage pass” to NASA itself.

NASA Tweetups provide @NASA followers with the opportunity to go behind-the-scenes at NASA facilities and events and speak with scientists, engineers, astronauts and managers. NASA Tweetups range from two hours to two days in length and include a “meet and greet” session to allow participants to mingle with fellow Tweeps and the people behind NASA’s Twitter feeds.

Arlo Midgett was a NASA Tweetup participant at the STS-132 Space Shuttle Launch Tweetup at Kennedy Space Center in Florida. Arlo put together a great video of the event that can be seen on NASA’s Tweetup page.

It’s working. NASA’s first tweetup was in January 2009 and by February, 2011 they had already held their 15th. For the tweetups, NASA uses a dedicated account @NASATweetup, and a specific hashtag: #NASATweetup.

NASA understands the importance of mobile. There is a fully functioning mobile version of NASA.gov and they use HTML5 to make sure the videos render well on mobile.

Photos and videos are critical to NASA’s social success. NASA has 18 YouTube accounts, 12 Flickr accounts and 5 UStream channels. In 2010, they switched to VMIX, a new video platform that emulates YouTube and according to Schierholz, has made NASA’s videos much more popular. Their fans are watching. They have over 1,500 videos that saw about 7.4 million plays in 2010.

NASA designed and executed a fun and engaging location-based partnership with Gowalla, called the “Search for the Moon Rocks” contest.

Fans had the opportunity to find and collect four NASA-related virtual items — a moon rock, a NASA patch, a spacesuit and a space shuttle by checking in to NASA visitor centers, agency-related locations, or one of hundreds of museums, planetariums, observatories, parks, zoos and other locations that are part of NASA’s Museum Alliance.

The virtual moon rocks were found when Gowalla users checked in to any location where a real one was on display. Gowalla and JESS3, a creative agency that specializes in data visualization, created a special edition NASA+Gowalla Map: Search for the Moon Rocks that can be seen below. 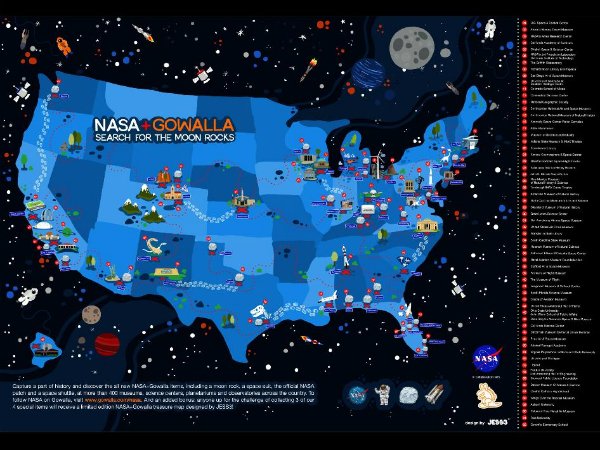 NASA also partnered with Foursquare. In October of 2010, astronaut Doug Wheelock performed the first ever check-in from space, checking in at the Space Station. This kicked off NASA’s partnership with Foursquare, as Wheelock unlocked the NASA Explorer Badge. Here is a video of Doug’s check-in. NASA then engaged their tribe by allowing earth-bound users to obtain the same badge by following NASA on Foursquare and checking into NASA-related venues.

Stephanie explained that’s it’s important to foster NASA’s space community but it’s not good to try to own the community. To this end, NASA encourages and engages with non-NASA groups like the Space Tweep Society.

Stephanie closed her presentation with an appropriate quote from David Rosen.

← Why Wikipedia Needs Marketers Augmented Reality - amazing but so what! →