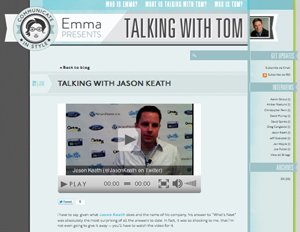 Is it possible to create a video blog using nothing other than an iPhone?

Since January, I’ve been attempting to answer that question with a passion project — Talking With Tom.

A little background, I decided that in 2011, I wanted to interview 52 digital thought leaders and ask them all just one question — What’s Next? Then I’d publish each interview, one per week, and at the end of the year, I’d do a wrap up to see if there were any thought trends that emerged.

And just to ensure I got maximum points from the Russian judge, I decided to do the entire thing from an iPhone. That’s right, each video is shot, edited and produced via an iPhone. And each post is written and published using the iPhone app from Posterous.

Why? Because I’d never done anything like this and it was a cool way to learn. And boy have I learned.

I’d classify that learning into two areas. First, I’ve discovered a bunch of cool tools to improve your iPhone videos. But I’ve also discovered a number of approaches that the successful iPhone video blogger could benefit from knowing. So here they are.

While the iPhone is a very convenient video blogging tool with an excellent camera, you really need to focus on controlling the audio and visual environment.

For the audio side of the house, invest in a good external mic but be sure to get the right iPhone external mic connector. That’s the easy part. The far more difficult part is the visual background. I’m shooting most of my videos at social media conferences and “on the fly” which means I don’t have a backdrop or anything.

What I’ve discovered is that this really does decrease the quality of the resulting video. For instance, here is a video shot with my buddy Tim Hayden on a dark, draped background and some cool background lighting. Now here is one I shot at BlogWorld NYC with Jason Keath. Jason’s video is shot in front of a BlogWorld backdrop, but ask yourself… which background is less distracting?

The real proof point on this for me was a video I haven’t uploaded yet where I had a chance to put the subject in front of a great light blue background with decent lighting… it looks so much better than most of the videos I’ve produced thus far. So if you’re going to go mobile video, take a few minutes to scout your locations in advance and find a really good spot both from a lighting and background perspective.

If you’ve ever seen really good web video, I’m betting it had great lighting. But if you’re shooting with an iPhone the lighting element is magnified. And if you’re doing a “man on the street interview” kind of thing like I am with Talking With Tom, lighting becomes an even bigger issue.

Ideally, you’d have some kind of three point lighting set up, but if that isn’t available I’d suggest a few things. Look for lighting opportunities. If you didn’t watch the Tim Hayden video, do so now. The upward lighting against the dark blue curtain created a pretty cool effect. Look for opportunities like that.

If that’s not available, try to find a window and use outside natural light on the side of the subject contrasting with internal supplied light (left hand side of subject) from a small lighting element. Currently I’m working on building some kind of mobile 3-point lighting set up… but thus far, no dice.

Lastly, if you click on different areas of the iPhone screen, the phone will autofocus and auto white balance the shot. By clicking on different areas within the field of vision, you can significantly effect the lighting in the video. Hint: it can also create a cool “zoom” effect in the video too. In case the Russian judge is still watching.

I’ve purposely focused on creating short videos. What I’ve learned is that for the most part, short works. While a few folks have wished that the videos where longer, the vast majority of folks found the 2-3 minute length to be optimum.

It allowed them to get in, get a good insight or two and then get out. Online folks are moving quickly and they don’t seem to want to get bogged down in your 10 minute video — TED videos would be the notable exception.

Also, if you’re using a platform like Posterous, you have a 100MB limit on each video. So if you go too long, or try to upload in too high of a resolution, the post won’t load. Yep, learned this one the hard way too.

I’m using iMovie for all of my editing on the iPhone. It certainly has it’s limitations but for the most part, it’s really quite fine for simple editing. In fact, I prefer the title option on the mobile version of iMovie to the desktop one. It’s classier in my opinion.

However, as noted, longer videos have exceeded the Posterous 100MB limit. This forced me to downgrade my export to Large vs HD and guess what, nobody noticed. So keep that in mind when you’re exporting. Not only does the smaller file size take up less room on your phone, it takes a lot less time to upload too.

NOTE: if you want to run a title bar across the your entire video, like I do on Talking With Tom, you’ll need to edit your video, export it to your camera roll and then import that video to iMovie as a new project. Then add your titling information and export again. You can export the first version as HD and then just export the final video as Large if you’re worried about any size limitations. This will keep a single title bar running the entire movie.

The iPhone will natively shoot in this format but if you don’t double tap the screen before you start shooting — so that you get the black bars top/bottom – you won’t see everything you’re videoing. So be sure to get the phone’s display into that 16:9 ratio and frame accordingly. Trust me, it makes a difference. We won’t say how I learned this beauty. 😉

Handheld camera support or if you’ll be moving at all, consider a Smoothee Cam — a steadicam for iPhones. You may think you’re not shaking, but believe me… you are.

The trick is to move your hands off the camera, which is why a handheld support might be enough. But if you’re planning on doing any kind of mobile video that involved you physically moving… check out the Smoothee. It’s truly an incredible tool that creates Hollywood like smooth videos. Here is one that I shot — just goofing off… look at how smooth the movement around the subject is and then try and duplicate it yourself with your iPhone… or any mobile video camera for that matter.

Actually this goes for pretty much any video production… the best stuff will almost always comes before and after the subject thinks the camera is off.

Let that baby roll and you’ll be surprised at what kind of content you capture. Even the most camera friendly folks become instantly more guarded when when they know the camera is rolling… off the record rules. So use it to your advantage, just make sure you get their permission to use the “oh we were recording that…” footage.

8. Leave room before and after

When you’re editing on iMovie (for iPhone) you’ll need a few extra seconds of “dead footage” before and after each take. For whatever reason, iMovie seems to trim the shots by a few extra milliseconds and if you haven’t left a bit of room you’ll regret it.

Also, iMovie has this weird quirk — sometimes it won’t recognize the videos on your camera roll. If that happens, you have to go into the camera roll and slightly trim the video (either beginning or end — matters not) and save as a NEW clip so that iMovie will then recognize the clip and allow you to import it for editing. Again, if you’ve left a few (3 seconds) front and back on each clip… this won’t be a problem.

So… that’s what I’ve learned. What about you? I’m sure some of you have been playing with the iPhone as a video capture tool…what tricks and techniques have you learned. Care to share?