HTML5 vs Apps, Who Will Win The Mobile Screen War? 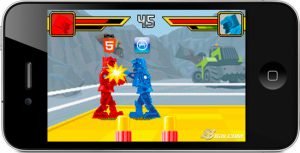 If you’re reading this, chances are you’re holding and/or reading this on an iPhone, Android, or Blackberry. Ok, if you have a Blackberry you’re probably not reading this on your mobile device. Let’s be serious. What you may not realize is the battle unfolding within the palm of your hand. While you’re waging war on fortified pig shelters, tech giants are building armies for the mobile screen war: native apps vs. HTML5

It all began in summer of 2007 when a well known fruit company from Palo Alto decided to make it’s mobile phone debut into a crowded and well fortified marketplace. It seemed innocent enough at the time. Sure, the hardware was typical Apple chic but the enemy (Nokia, Blackberry, Samsung, LG) had no idea that this was Apple’s Trojan Horse. Over the following few years, the iPhone single handily redefined the battlefield for lazy hardware and mobile OS manufacturers. No longer would consumers settle for email, solitaire and maybe a few tunes on their phones. Enter: the App Store.

There’s An App (Browser?) for That

Now you have tens of thousands of games to choose from, including 68 versions of your favorite single player card game. Thanks to apps like Spotify, Last.fm, iTunes, and others you can take your entire music library with you on the go. In fact, regardless of your interest or mobile hobby of choice chances are there’s an app for just about anything your heart desires. But according to eMarketer, apps haven’t quite taken over the world yet.  Based on the latest numbers, mobile users still choose the browser over apps for certain activities such as: shopping, searching, or entertainment (see below) 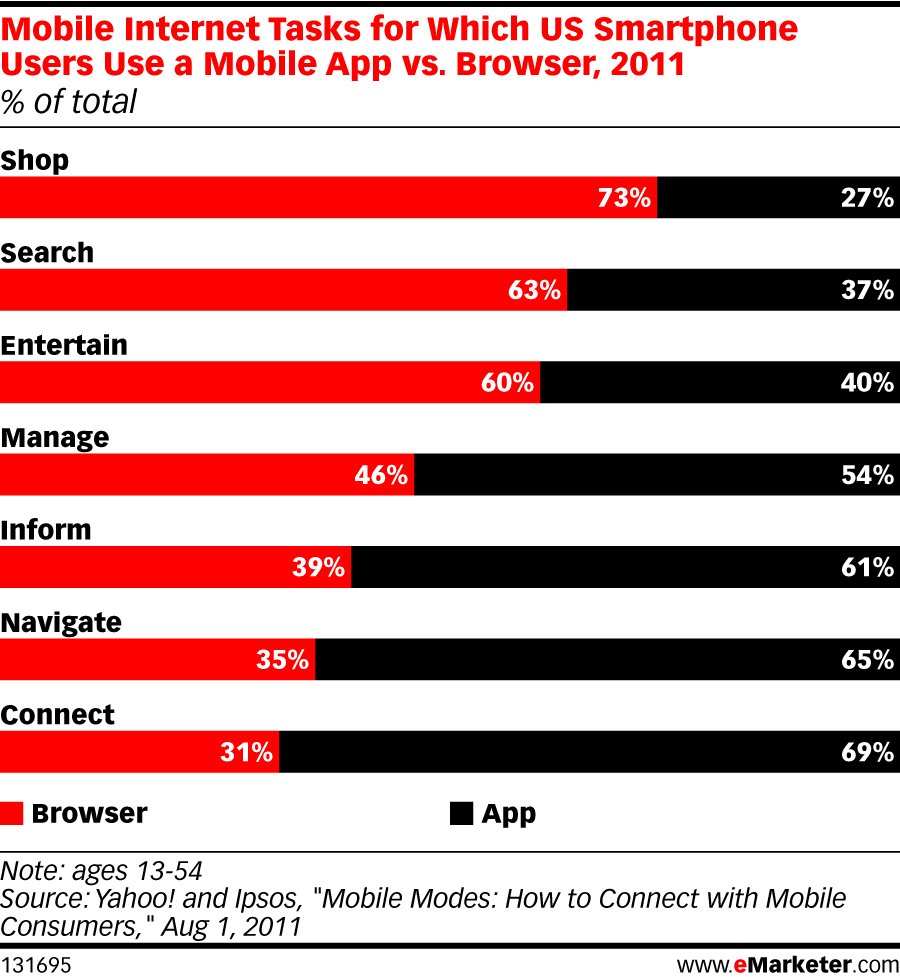 Rather than geeking out with endless lists of stats or specs for these competing technologies, perhaps we should take a look at what consumers are doing today. Sure, native apps allow you to tap into the snazziest bells & whistles on your smartphone of choice. GPS, camera, tilt recognition, compass, and the list keeps growing and growing. Smart phones have become mobile Swiss army knives, sort of all purpose utilities. But, what if you just want consumers to butter your proverbial bread? For example: maybe I want to launch a simple touch enabled catalogue. Do I need a full blown iOS app for that? The answer is yes, if I want to add some fancy AR feature (eBay Fashionapp). But not so much if I’m simply offering a tablet optimized site for your viewing and ordering pleasure (see the Wal-Mart HTML5 site). This would be a mobile site that doesn’t require any specific native app to run. In other words, HTML5 is device-agnostic.

All About the Benjamins

Beyond user experience, perhaps what’s really driving this mobile arms race is mobile commerce, or mCommerce if you prefer to sound slightly more nerdy. Marketers originally flocked to the iOS App Store because that’s where the people, and therefore the paychecks congregated. But in this newly minted HTML5 world, users/developers have more and more choices when it comes to browsing and shopping on the go.  As we saw with Amazon, marketers will happily build their own HTML5 sitesin order to circumnavigate Apple’s 30% take on all in app purchases.

So What Does This Mean?

Businesses will do what businesses do: make money by offering consumers what they want, and right now that seems to be a bit of native apps and HTML5 sites — a decidedly costly game. Although there are examples of one platform companies (see Instagram – reportedly working on an Android app) while other companies take a multi platform approach (i.e. Kayak, Twitter) many are still fast at work on developing a mobile strategy. Over the next year or so, this fragmented space will begin to sort itself out.  Smart marketers will make calculated gambles based on the needs of their customers. And in the end, the consumer wins with more mobile apps/sites in which to enjoy entertainment, shopping, media, and more on the go.

Is your business using HTML5 and/or Apps?  Let us know in the comments.

← Where Did All The Google Places Reviews Go? Top 5 Ways Social Media is Used by the Travel Industry →