How To Use Siri for Social Media Management 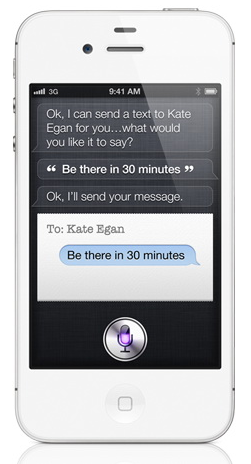 In case you haven’t heard, Siri is the next big thing from the Apple team.

This voice interaction system turns your iPhone into a virtual personal assistant, and with a wicked voice to boot. The technology behind it is revolutionary, so it’s no surprise that it’s making waves – even in social media management.

Siri allows you to book appointments, set alarms, send emails, check the weather, make notes and even text without having to actually fiddle around with your iPhone.

It manages all of these tasks for you (and more) based on voice commands. There is no denying the fact that Siri makes life easier, but what’s really impressive is how well it allows you to manage your social media accounts.

The first thing you’ll notice with Siri is that she does not want to help you use Twitter or Facebook at all. She will promptly let you know that she can’t help you use social media and will await your next instruction.

Fortunately for the socia media mavens, there’s a way around this.

2. Save Short Codes In Your Phonebook

Next, add these two numbers as contacts in your phone. Just name them “Twitter” and “Facebook” and you’re ready to go.

Now that you have added these two contacts, you can start using Siri for social media management. The most obvious use is sending tweets and posting status updates. All it takes is a quick, “Send a text to Facebook [your status update]”.

It’s important to remember that this setup is using the Twitter and Facebook mobile systems. So, anything you can do via text, you can do with Siri. You can follow, unfollow, turn notifications on and off, retweet, send private messages, etc. Experiment to see what works and what doesn’t.

The only significant problems Siri presents are that she is sometimes confused by the words “Twitter” and “Facebook”. If those contact names become a problem, the simple solution is renaming them. Also, Siri sometimes has trouble with proper names and usernames. Of course, this is to be expected in the beginning.

Tip from the comments: Save Facebook as first name “Face,” last name “Book” and speak it as two names.

We all know that social media never turns off and that the world lives on the go. Siri makes social media management easy when you’re out and about, or just too lazy to turn on your laptop.

It’s no TweetDeck, but it makes basic social media management more convenient than it’s ever been. Staying up to date with your brand’s social media accounts without ever touching a keypad? Sounds pretty awesome to me.

What’s really exciting about all of this is that it’s just the beginning. Imagine where Siri will be in six weeks, six months, six years. There is no doubt that we can look to Siri to change the way we manage social media in the not-so-distant future. For now, we’ll appreciate the basics and watch as Apple makes steady improvements.

How have you been using Siri so far? Do you think that it makes social media management easier or that it’s just a novelty feature?