For nearly a week, the world has turned its quizzical gaze toward the Far East skies and surf.

Malaysia Airlines flight MH370 vanished en route to Beijing from Kuala Lumpur on Saturday, March 8, with 227 passengers and 12 crew on-board, and the investigation into what happened has yielded many more questions than answers.

Malaysia Airlines’ response to the MH370 crisis will greatly impact its long-term future. While the airline jumped into action through public relations and social media, many of its statements have been cryptic and confusing. The company’s erratic response opened the door to speculation from countless voices across news outlets, blogs and social media.

Will the Malaysia Airlines brand be able to rebound, or is it destined for a spot in airline history alongside the likes of Pan Am, Eastern and Hooters Air?

The Mistakes of Asiana

As Malaysia Airlines considers its next crisis communication steps, it may be wise of the airline’s leadership to learn from the errors of its nearby neighbor, Asiana Airlines, following its San Francisco crash last year.

On July 6, 2013, Asiana Airlines Flight 214 crashed on final approach to San Francisco International Airport, the first fatal passenger airliner crash in the United States in more than four years. In the immediate aftermath of the tragedy, Asiana was silent for more than four hours, finally reopening communication channels with this plain tweet:

Asiana’s tweet fell largely on deaf ears, as did the indifferent press release posted two hours later – a belated six hours after the crash. By then, the story had already been told and public opinion was substantially formed.

Many of the surviving passengers had taken out their smartphones seconds after scrambling off the plane and already shared photos of the crash through social media. David Eun, head of Samsung’s Open Innovation Center, was one of those passengers and live-tweeted the entire episode. One of his startling images of the plane was retweeted more than 32,000 times. 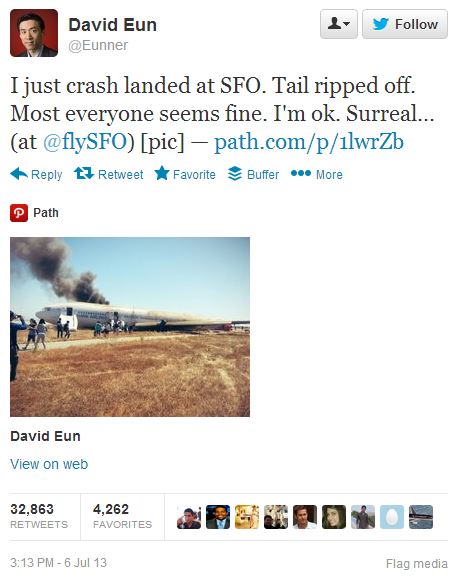 Similar to Malaysia Airlines, Asiana had absolutely no control of the situation. Truth mixed with rumors, and in the process the airline suffered a devastating, largely self-inflicted blow to its brand.

Southwest Airlines, by positive contrast, set a high mark worthy of praise and replication. On July 23, 2013, the nose gear on Southwest Flight 345 collapsed and caused a rough, uncontrolled landing at LaGuardia Airport. The plane skidded 2,175 feet – more than seven football fields – before stopping at the edge of the runway. Ten passengers were hurt, six of them needing hospital treatment for minor injuries.

Barely half an hour after the incident, Southwest was actively communicating with the public, issuing an official hashtag and reassuring interested parties that the airline would play an active role in informing the public about what had happened.”

The airline’s immediate, proactive and informative digital response was not unusual for Southwest, and it did not go unnoticed.

“Southwest cannot be topped when it comes to social media crisis communications,” said Steven Frishling, a travel and aerospace social media consultant. “If something happens, the airline is immediately on top of it. They are saying either ‘it happened’ or ‘we are investigating it,’ but they own that conversation.”

Frishling, who has developed crisis plans for numerous airlines across the globe, recognizes how easy it is to lose control of a crisis in today’s digital age.

“Within six minutes of the Southwest flight going down, I had already seen over 40 tweets about it. I had over a dozen text messages and was looking at somebody’s Facebook who wrote about being at the airport and watching the plane skid. That conversation already started. People know about it. Somebody got off the plane, posted a picture to Instagram, and their Instagram account got picked up by CBS, CNN and Yahoo News right away.”

The power of social media as a listening and monitoring platform provides a variety of new ways to verify reports and take action promptly. “Before social media, it sometimes took up to an hour to even confirm that one of your planes was involved,” explains Morgan Johnston, manager of corporate communication and social media strategist at JetBlue Airways. “Now with social media and the kind of real-time reporting that’s happening, you see 14 different photos and 14 different angles of roughly the same scene, and you suddenly start feeling pretty confident that the flight is yours.”

Social media, while vital for listening, can be even more powerful for framing and distributing your own news. According to consultant Frishling: “Social is the first place you have to go. You need to say the incident occurred – the flight number, the airport – and that you are gathering information and will keep the public updated. Then, every ten minutes, even if you have nothing new, you keep saying, ‘We’re still looking into it.’ All that matters is that you’re on it, and as soon as you have something new to release, you release it.”

But where exactly should you distribute your message when everything is on the line and you don’t have a second to spare?

Johnston, of JetBlue, points to a path out of the confusion. “The difficult thing with having multiple channels is that there are multiple places where people think they need to go for the most up-to-date information. What you really want to do in a crisis scenario is limit the amount of places that people think they need to look. If you can centralize the information and use all the different channels to point to that central database of information, you’re more likely to have your message delivered.”

But doesn’t a company need a crisis plan before it starts messaging across social media?

Absolutely, but no one plan will fit all – or even most – situations. As Rachael Rensink, manager of social marketing strategy and engagement at Delta Air Lines, explains, “Do not create a plan and put it on the shelf until you really need it. Plan, test, practice, evaluate, re-test, re-evaluate, evolve, etc. Social media changes and evolves so quickly, and you need to evolve with it. This is not a situation where one size fits all, and one plan fits all. Is your company growing its social footprint? Is it growing its social staffing? Your plan needs to grow with it.”

It’s one thing to write a crisis plan, but entirely another to live it. Implementing a social media plan in the midst of a major emergency requires a clear definition of roles, alternative plans and trained support options.

Rensink explains how social media fits into the mix during a potential crisis at Delta. “Social follows what is determined by the crisis coordinator during the event. Our social teams are there to not only execute the plan, but to help develop copy that is socially appropriate, by channel/community, and also to advise on what the current social conversations are, where they are, and what we might need to address. I cannot express enough how critical coordination is with all teams involved and that social is just one of the pieces of an effective crisis communications plan.”

Crises are rarely short-term events. While the actual on-the-ground emergency may be over after a few hours, the crisis online may continue far longer.

“You want to have backups and secondaries, and frankly you want to have people who can give other people relief,” explains JetBlue’s Johnston. “A crisis isn’t going to only occur during normal business hours. You need to plan for an emergency response that can last for days, weeks or even months. So the question becomes, how do you relieve people so they can get some rest and be able to function properly?”

While Southwest’s tweet just minutes after the Flight 345 incident didn’t include any details about what had occurred, it greatly helped the airline own the conversation. Southwest ended the tweet with #Flight345, thereby establishing it as the airline’s official hashtag for the incident.

“Create your own hashtag,” suggests Frishling, the social media consultant. “If you own the hashtag and immediately make it the primary hashtag, you’ll get the media using it, too. If someone is looking for info about Flight FX123 and they see you use #FX123, that’s it. Everyone will come to you because you’re using the hashtag and you now own that conversation. You can use that hashtag to track the conversation, know what’s being said incorrectly and start correcting it as fast as you can with the heavy hitters in the industry who are simply getting it wrong.”

When Asiana Airlines finally issued its first tweet hours after the San Francisco crash, it used the hashtag #SFO. This was a problem, because by then most of the conversation was already happening on the hashtags #OZ214 and #Asiana.

The crisis within the crisis for Asiana, in retrospect, was its relatively slow response to creating, maintaining and owning the conversation about its crash.

“As we saw from Asiana, there was lots of misinformation running around in that first half an hour,” says JetBlue’s Johnston. “Hashtags help facilitate some alignment on the conversation so everyone’s paying attention to the same sort of thing. We’re more likely to be able to insert the proper resources so that, as we verify information, it’s visible.”

Crisis communication has changed by leaps and bounds over the last five years. Today, the initial news “announcement” frequently comes from a participant or onlooker at the scene, followed by mainstream news outlets. Brands in crisis – faced with emergencies that can range from a plane crash to the malfunctioning of a vital software system to the unruly behavior of an unthinking celebrity  – must be as truthful and transparent as possible. Thanks to today’s technology, everyone is an amateur investigative reporter with the resources to find the truth, often before the brand owner even knows it.

In the case of Malaysia Airlines MH370, thousands of people worldwide have turned to satellite imagery to search for answers themselves. When the final conclusion is reached, it is doubtful that the brand will be behind it. Now is the time to listen, empower and lead.

The era of purely reactive crisis communication is over. Social has arrived on the scene.