Let’s be honest, how many of us have ever gone to Youtube thinking “I can’t wait to see another Discount Double Check ad?”  No offense to Aaron Rodgers but no one. You want to get in there, watch your Doge videos and get out as quickly as possible.

As avid internet explorers themselves, the team at online food ordering service Eat24 realized that most people would already be looking to skip the ad as soon as possible. So instead of trying to woo them within seconds, they kept it real and threw up a quick message with their Twitter handle inviting viewers to skip the ad.

The epiphany happened inside a brainstorming session, turning into pre-roll gold.

“It started as a joke, there were no big strategy meetings. It just an idea we ran with.” said Amir Eisenberg, Social Media Chief for Eat24.

The response was much greater than they expected:

In reality, the number of people who complete or click on preroll ads is pretty small. Doubleclick reported that in 2009 only 53% of online video ads were completed. But on Youtube, skipping ads has become a common thing thanks to “TrueView” Skipping Technology.

In this Slideshare Google themselves explains their “TrueView” Skipping technology as driving higher engagement while delivering free value, since there’s a clear moment of branded content for at least five seconds (and you don’t pay unless they watch the full ad). In 2012 they reported TrueView ad watchers are up to 75% more engaged over standard pre-roll ads.

For Eat24, creating this kind of brand awareness ultimately led to thousands more orders from new customers and new conversations online about their ads. But for a growing company bootstrapped out of San Francisco, it was about keeping in stride with their brand voice.

“The Skip This Ad commercials take the same light-hearted tone and cheekiness that I think is respective of all our social channels” said Amir. Don’t believe it? Send a tweet to @Eat24 and you’re sure to end up on the receiving end of some interesting conversation before, during, or after your food arrives.

When your site caters to fast, convenient food delivery without ever having to leave the couch, you put yourself in a prime position to build community around people who live their life online. In the case of Eat24, they put themselves in the customer’s shoes to uncover new opportunities that paid off.

While asking people to skip your ads might not be the best tactic for every brand, it presents an interesting example of thinking about your community as humans and not just users. 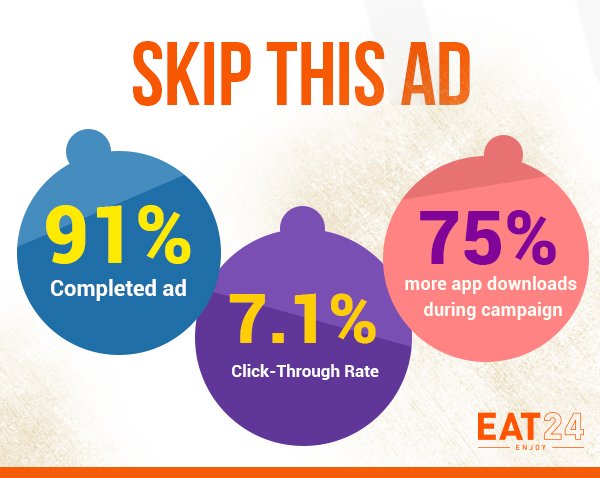