Originally published on the Simply Measured blog by Libby Snead 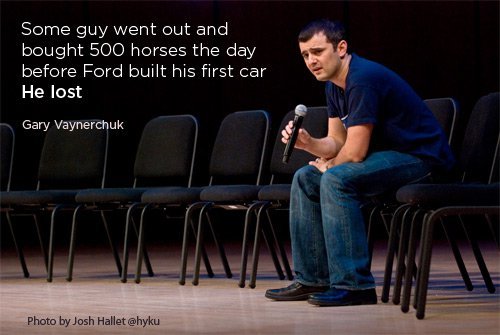 Rising above the noise and building an influential presence on Twitter is no small feat. Using our Twitter Analytics, we’re starting a new series to share data from Twitter’s leading voices.

Our goal is to understand how these top individuals have built and sustained their profiles.

This week, our analysis focuses on Gary Vaynerchuk (@GaryVee).

In case you don’t know, Gary is co-founder of Vayner Media and a self-trained wine and social media expert.

Since launching his Twitter account five years ago, he has become a highly engaged, thought-leader in the Twittersphere.

Averaging a daily growth rate of nearly 100 new followers, and sending over 60 Tweets per day, Gary’s Twitter presence continues to expand. Based on the data, here is why this is happening.

Being Responsive & Creating Conversations: Key Traits of a Good Influencer

On average, Gary replies to 8% of his over 2,700 mentions per week. By engaging like this, he builds the perception that he is involved with his community, not just talking at his followers.

Gary is also quick to engage with his followers. His response time is normally within 30 minutes of someone mentioning him. This reinforces the idea that he is not only listening to what the community says, but he also converses with those same people.

Responding at All Hours

The majority of the day, Gary is interacting on Twitter. His “business hours” appear to be from 5:00 AM to 10:00 PM Pacific Time. This level of accessibility strengthens the idea that he is there to support and be involved with his community.

Based on his most influential topics,

listed to the right, we see that Gary “stays on message.” These directly reflect what he has built his image around. We can assume that this strategy helps retain followers as he continues to share content that is related to what originally motivated them to follow him.

Building a lasting Twitter presence with 900,000+ followers is a worthwhile goal. Based on Gary’s success, key elements of a long-term Twitter approach are: be responsive, accessible, and build a community, not just a following. Doing this will keep people interested in what you have to say and entice new followers to join in the conversation.