I remember when Zuckerberg was espousing HTML5 exclusively and the thought of a Facebook iOS app was against the Facebook vision.

When the Facebook iPhone app launched, with hundreds of millions of global users, it quickly became the most popular app of all time. So, perhaps, Facebook has been an app company since that day.

Of course, Zuckerberg then denounced the iPad as not being a mobile platform, and had it out with Steve Jobs when Apple tried to integrate Facebook with their new social music platform.

That day has clearly come and gone.

Zuckerberg has made it clear on more than one occasion that mobile is the new focus of Facebook. And if he hadn’t, we could have easily picked apart recent Facebook acquistions and mobile app releases to make the case for ourselves.

A quick breakdown of the last couple months shows us that Facebook has either released or purchased 6 iOS apps in the last 30 days. Before that we saw Facebook purchase Gowalla and Beluga. 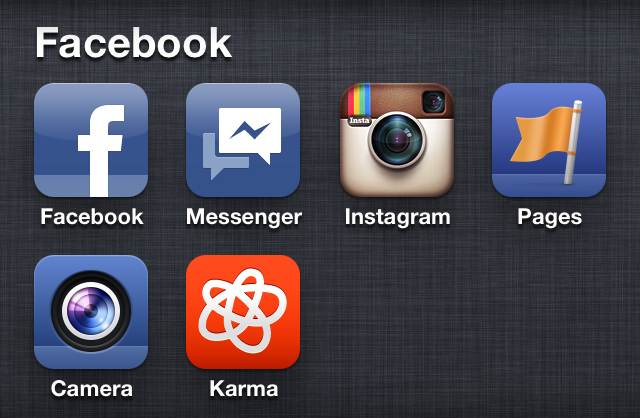 Facebook, clearly, has gotten over their aversion to apps very quickly. As a young, essentially software company, Facebook is very nimble. They can move quickly in new directions. Sometimes those directions can be ugly to watch.

For the third time.

“Mark is worried that if he doesn’t create a mobile phone in the near future that Facebook will simply become an app on other mobile platforms,” said an unnamed Facebook employee.

Unfortunately, the Facebook phone sounds real. They are even rumored to be on the market for a mobile browser.

But why a phone?

Zuckerberg’s own words (from an anonymous source) seems to suggest that just being an app (or 10 apps) on other smartphones would be bad for business. But where is the business case?

Here are a few arguments Zuck could make for building his own phone hardware company inside of Facebook:

This makes sense. If you own the phone, you own the user base of the phone. But Facebook already owns the user base. They have been the most popular iPhone app for years. Trying to own the hardware so they can own the end user’s choices is just lazy. If the Facebook product loses out to another social network, or group of social networks, then they will lose the user base, not because they don’t have a phone.

2. To own the advertising

Facebook owns adds on Facebook.com and badly needs to monetize the growing number of users who access the site through mobile phones. They started to do that with Facebook promoted posts last week, but if they owned the phone, more options would exist. They could use the location features, maps, email, browser, search and other basic smartphone features as platforms for ad products.

Except, there are a few really smart companies out there that own smartphone markets (see Apple, Google) and do not make a ton of money off the ads. Facebook is an innovator, but they will not breakthrough where Apple and Google have yet to succeed. Google is an advertising company. Apple is a mobile company. And both have failed to make mobile ads support a larger business goal on their own.

3. To profit from selling the hardware

And, one small detail, both of those companies had huge revenue bases established before they jumped into hardware as an investment. Facebook on the other hand, is still trying to find stability. We see this in their stock price.

Facebook may make the most brilliant mobile phone OS we have ever seen. They may even partner with awesome hardware manufacturers and create a very innovative smartphone. But guess what? That is not enough. Microsoft just did that and is still having to spend their way to find a tiny taste of this competitive market.

And Facebook already has the “in” at Microsoft (Microsoft owns 5% of Facebook). They could easily swing a few deals and make Windows Phone the de facto Facebook phone with Bing search and Bing maps. Both powered by Facebook goodness of course.

Taking time away from the Facebook core business of ads is a bad move. Zuckerberg is reaching beyond the young legacy he has built himself to date.