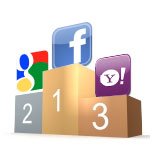 Did you know that Facebook’s ad network is growing faster than Google’s did?

If you compare the first four years of ads sales by Facebook and Google, Facebook did better every year. Look at the numbers from SeekingAlpha and compare those to Google’s past financials.

The last three years, Facebook has achieved 126% higher ad sales numbers than Google did during their second through fourth years of ad sales.

If they can continue on their same, stable growth pattern; then the graph below shows what their projected value would be all the way out to 2017.

eMarketer has made less optimistic projections. They report higher revenue numbers from Facebook during 2007-2009 than SeekingAlpha, but they project that Facebook’s ad sales will slow more than Google’s did in their 5th year, which you can see graphed below.

So, who is right? Will Facebook continue to outpace Google’s past performance, or are Facebook’s strongest growth years behind them? Let’s take a closer look.

Let’s start by looking at the compelling reasons for why Facebook’s best years are yet to come.

1. Facebook has done better than Google’s historic performance every year

eMarketer has revised their projections a few times. In March of 2009, they thought worldwide spending for all social network advertising would only increase by $2.83 billion in 2011. Earlier this year, however, they increased those numbers with Facebook alone projected to sell over $4 billion worldwide.

Now, early signs suggest that Facebook could exceed those expectations. This consistently strong performance from Facebook is possibly the only evidence we need to know what their future holds.

Geoffery Fowler from the Wall Street Journal recently reported ComScore’s discovery that Facebook has the most display ad inventory in the US. And, their newer ad units are yielding better performance.

We’re getting a consistent 8-10X better conversion rates on Sponsored Stories and Sponsored Likes. Peter Yared, our VP of Social at Webtrends, believes Facebook could begin to introduce standard IAB formats and they’d get an influx of ad buys.

And, if they’d enable behavioral retargeting, optimization, and some other premium features; it would perform even better. I’d say the performance from Facebook ads continues to improve, which means people will buy more. That fuels the next trend.

3. Prices appear to be going up

Fowler’s WSJ article I linked to earlier also reported that Efficient Frontier, a leading software vendor in Facebook ad management, reported that the average cost per click rose 40% during the first quarter of this year.

So, if you put it all together:

It all suggests that Facebook’s ad network will grow in the near future.

I don’t want to come off like a kool-aid drinking social evangelist.

So, what are the risks ahead for Facebook that could knock them off their trajectory?

1. Lack of innovation for their ad network

If Facebook doesn’t continue to improve their ad experience, their sales growth could taper off below Google’s historic performance benchmark.

Because the performance of their ads are not on par with more mature practices like search. Or email. They are continuing to improve, but their window to prove their value proposition as performance marketing is closing. If by the end of this year they don’t show significant, directly attributable conversion improvement, it could slow ad sales.

For example, I was into MySpace when they had around 200,000 users and used it for a few years before I grew tired of it. That was before Facebook was open to people out of college, so I didn’t start using Facebook right away.

Now, I’m using Facebook more than I ever used MySpace. However, sometimes networks do fall out of favor entirely due to fatigue, which is a risk. *cough* MySpace *cough*

There are a number of critical steps ahead for Facebook. An IPO. Ongoing privacy concerns. Continuing to grow active users. A misstep in any one of these areas could slow revenue.

Personally, I think Facebook is surrounded by good company that can help them overcome all of these challenges. But, what do you think?

Do you think Facebook will continue to outpace the growth of Google?

← Twitter Chats, The Ultimate How To Guide A Social Media Race To The White House 2012 →