Engagement is Dead. The New Metric is Attention.

Guest post by Carrie Kerpen, CEO of Likeable Media and author of the book “Work It: Secrets for Success from the Boldest Women in Business“ 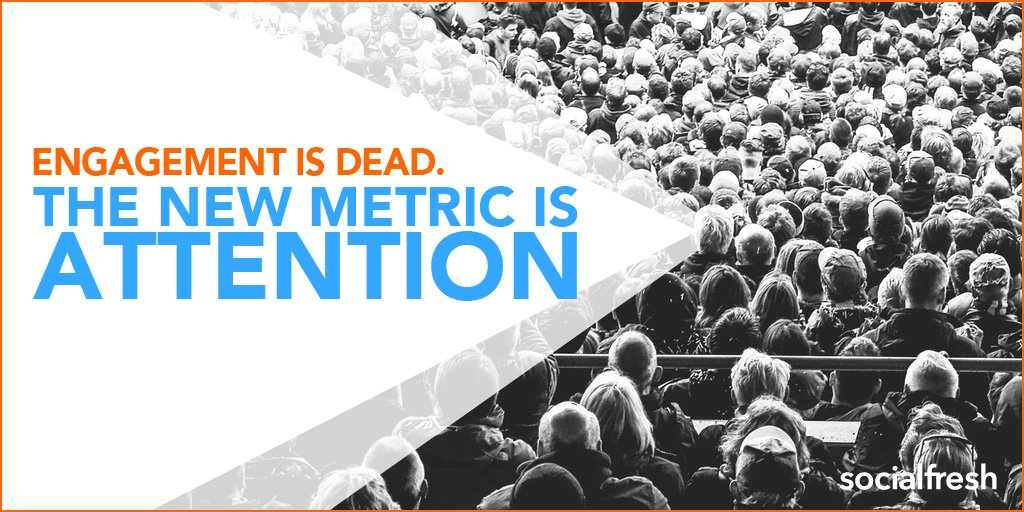 At the dawn of social media (2004 if you start at Facebook, 1997 if you are a Six Degrees purist), the mark of personal popularity was friend count. You wanted to make new friends so you could build up your network.

In 2006, Facebook launched the News Feed while Twitter joined the party with a 140-character limit, but the real breakthrough didn’t happen until 2009. That was the year Mark Zuckerberg rolled out the Like button–and lo, the miracle of direct, measurable consumer engagement came to be.

For the next five years, friend/fan count and engagement became the currency of social media. Without the option of paid ads, social was a purely earned media platform that brands were forced to approach just like any other teenager: start a page, build a following, post content, get engagement.

Engagements were valuable not just because they validated a brand’s social existence, but because each engagement generated a news item that was shared to friends’ feeds. This was the only way, within the platform, for brands to reach new people outside of their fan base.

All of the social networks encouraged brands to post as frequently as possible, hungry for content that would keep their users entertained. Facebook actually penalized accounts that did not post at least once a day. Understandably, brands took their cues and posted often to increase engagement.

In 2013, the first social advertising became available on Facebook. Not much changed at first other than fan acquisition and paid engagement getting supercharged with incoming cash. But eventually, two important things happened.

First, Facebook realized it was giving away what it wanted brands to pay for via organic reach. This led to Reachaggedon. In less than a year, organic reach for brands dropped from 10-15% to below 1%, rendering most fan bases largely irrelevant.

The second important event was that Facebook discovered it couldn’t prove the ROI on engagement. The problem was (and is) that people willing to engage with a brand are not always the most valuable customers, and vice versa. Plenty of loyal customers are ready and willing to buy your product, but have zero interest in engaging with your brand’s social ads—or any social ad—ever.

By running a campaign optimized for engagement, a marketer is instructing Facebook to:

Hypothetically, let’s assume (very generously) that 50% of a brand’s customers are willing to engage with an ad. This means that every engagement campaign excludes at least half of all potential customers.

That’s definitely not a smart business strategy. But if not engagement, what social metric does drive business results at the top of the sales funnel?

Interestingly, the answer is something close to a GRP or impression. Facebook calls it the Brand Awareness objective and measures it via Estimated Ad Recall Lift (EARL): the number of people who are likely to remember your ad two days after seeing it.

The exact formula for EARL is secret, but what it all boils down to is relative attention. The following example scenarios* help explain the concept:

*the numbers below are illustrative and do not indicate how Facebook actually performs the calculations.

For marketers who use social for non-DR purposes, the message is clear. Fans and engagement remain something unique to social and are fundamental to why people use those platforms. They will continue to have value. Focusing solely on those two metrics, however, can severely limit the potential of the social medium.

Instead, marketers should focus on investing in good content that grabs attention and stops the thumb. Pair that with the right paid strategy to reach the right people and that’s what will earn brands the best return on their social investment.

← How To Build Your First App: 7 Secrets From The Founders 7 Social Media Marketing Tips for Financial Services →