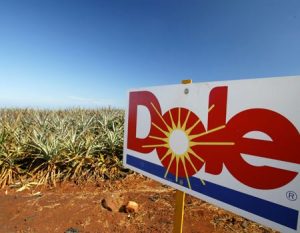 Driving into work today (April 16, 2012), I was flipping through the radio dial and caught a story on NPR about how Dole Food Company had issued a recall.

Apparently, it was a fairly small matter involving about 750 cases of a particular Dole bagged salad product that may pose a threat from Salmonella.

The timing was interesting, as I had been thinking about writing a blog post on ways to use social media during a crisis.

Certainly, a food recall qualifies as a crisis. And Salmonella can kill people — it represents almost 30 percent of food-borne illness-related deaths each year, according to the Centers of Disease Control.

Did Dole Seize The Opportunity?

So the first thing I did at the office was to go online to see what Dole was doing.

Surely, I thought, they would handle this with confidence.

After all, they are the world’s largest producer and marketer of fruit and fresh vegetables that does business in more than 90 countries and employs some 36,000 full-time, regular employees worldwide—not to mention 23,000 full-time seasonal or temporary employees (according to their LinkedIn page).

Boy, was I wrong.

After spending some time dissecting just how poorly Dole was handling this, I came away with several lessons to share.

By the way, this post is not meant to be overtly negative toward Dole—I’m a customer of the company, like their products and will continue to support them. However, this particular “crisis” demonstrates that even a monolithic enterprise like Dole has a long way to go to be able to handle a true crisis effectively using social media.

Another example of similar inaction is when Sony experienced a Playstation Network outage in 2011. Instead of the physical health of their customers being at risk,they were dealing with their financial health—as 77 million Playstation customers had credit card information stolen. Sony finally confirmed this to customers a full 14 days after the incident.

This resulted in weeks of bad press for Sony as well as questioning of the company by U.S. and British elected officials.

Why Should Your Company Care?

Especially for large companies, people now expect you to be using social media to effectively communicate. Just like they expect you to have a help desk or a 1-800 help line.

Consumers don’t care about whatever internal politics, poor organizational structure and other excuses you might come up with for not using social media well.

If their grandparents can do it (for crying out loud), then you have zero rationale anymore to avoid staying on top of technology. And the “we don’t have enough people to handle it” mentality doesn’t cut it any more.

Companies have to figure out how to scale their operations accordingly.

One would think that among 36,000 employees, in this Dole example, there would be at least one person willing and able to use social media responsibly to warn the public about this recall.

The Risk Of Inaction

During a crisis situation, it is even more urgent for organizations to act fast and in a proactive fashion. Simply sitting on the sidelines, silently, says four things to people:

Let’s review the 9 questions your company needs to ask before a crisis like this occurs.

I found out about the Dole crisis early on Monday morning, April 16, 2012. I discovered Dole knew about this over the weekend, and perhaps even late the previous week.

As you will see below, the recall news did not appear on any of Dole’s social media channels that I could find until about 1pm Eastern Time Monday (two full days after their press release was issued).

Let’s say your company or organization gets hit with a crisis. It could be a product recall, a natural disaster, a tragedy in one of your locations—you name it. One of the first places people will go is your home page.

With the Dole recall, notice there are no news items on their home page, nor any prominent navigation buttons to news. 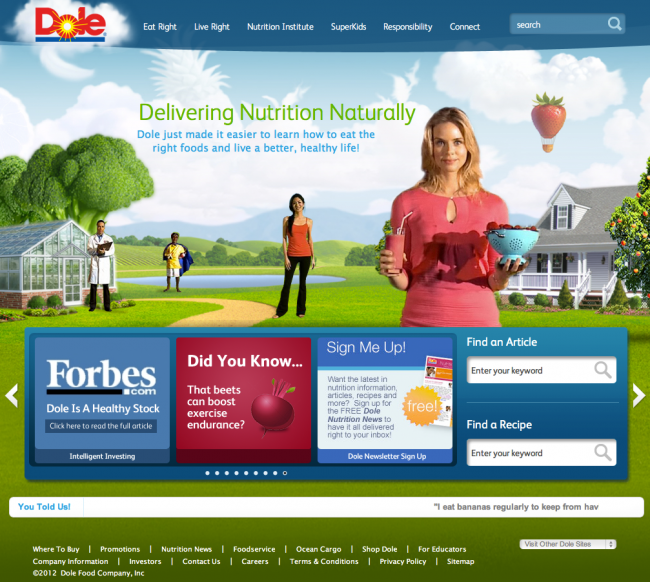 You might think you could find something about the recall in the footer link called Nutrition News, but that just pulls up this page: 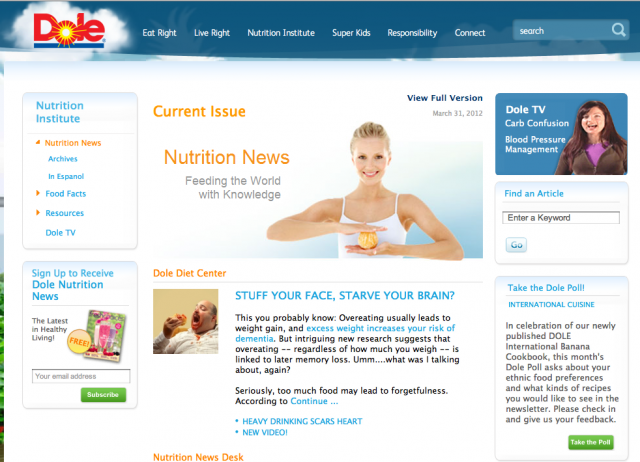 Instead, to find news releases, you first have to click Company Information then either News Center or Press Releases. That’s a minimum of two clicks from the home page. 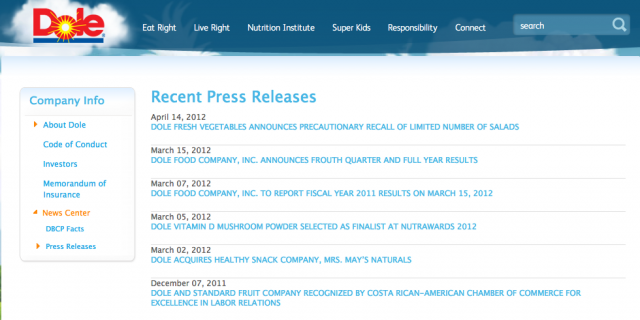 3. Where Is Your Social Media Presence?

After visiting your website (or increasingly for many people, before they go to your actual site), they will seek you out on social media sites. When crisis strikes, it’s too late to register and set up your social profiles. 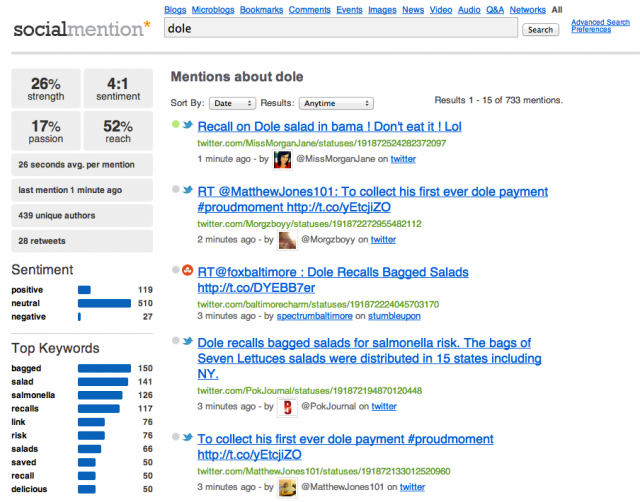 4. Where is Your Company Blog?

Do you have a blog? If you’re a global company with 36,000 full-time employees, of course you have a blog, right? Based on a Google search, Dole does not. 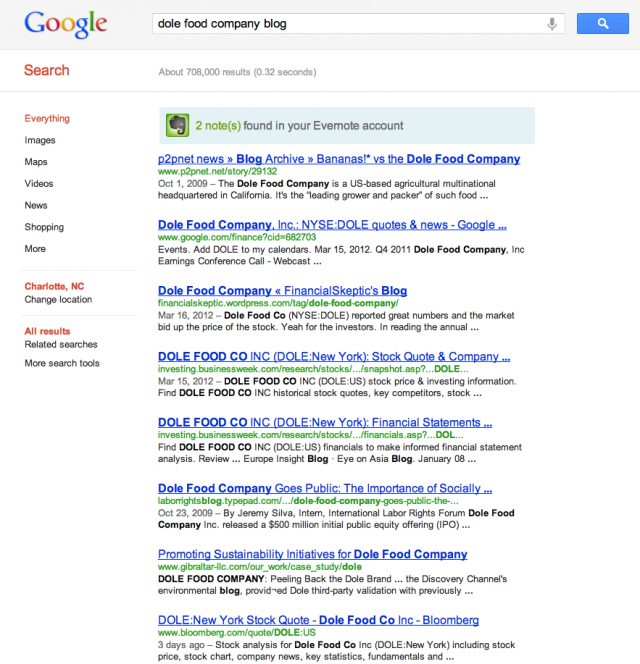 5. What Industry Blogs Will Customers Turn To?

What are others saying about your company during a crisis?

For Dole, many people used it as an opportunity to vent their frustrations on sites like Huffington Post. The company was noticeably absent in responding. 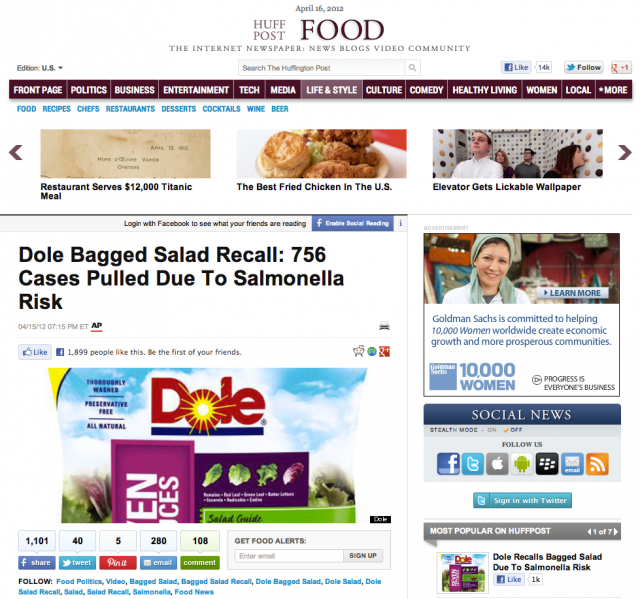 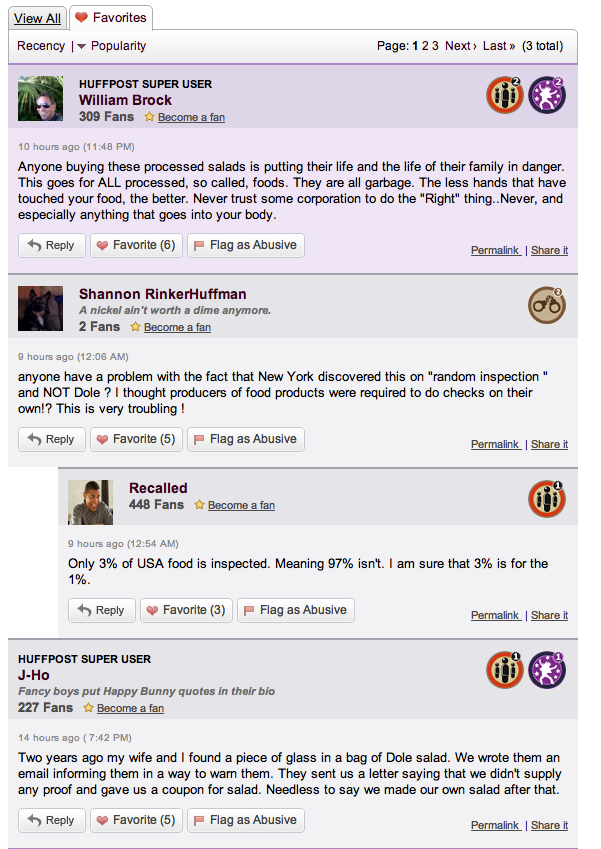 Dole really dropped the ball on Facebook. Two days after the recall was announced via their press release, their main post was about the Dole Real Fruit Bites’ 3 Steps to Bliss sweepstakes. Seriously, even though people’s lives may be at stake with bags of their salads sitting in the fridge or on store shelves. 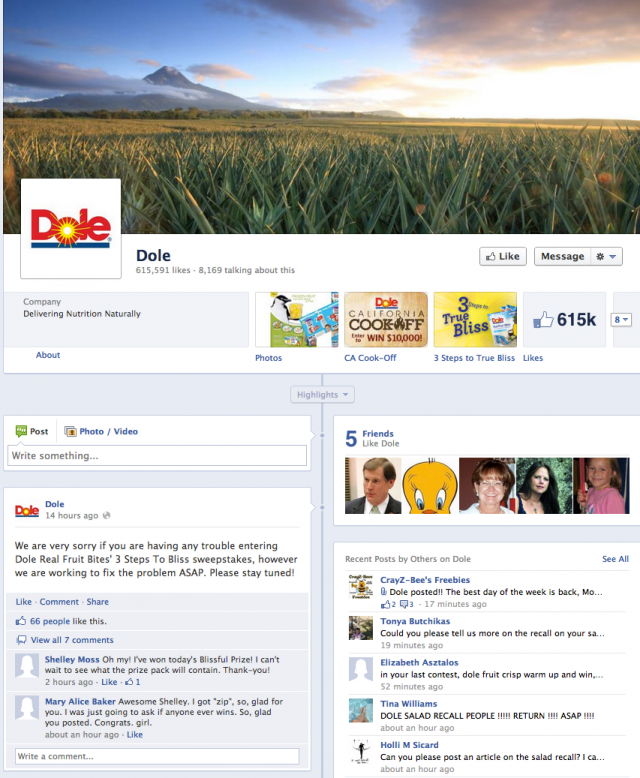 Several people were posting about the crisis, with no response back from Dole. I personally posted a message there (and on Google+) and never got  a reply. 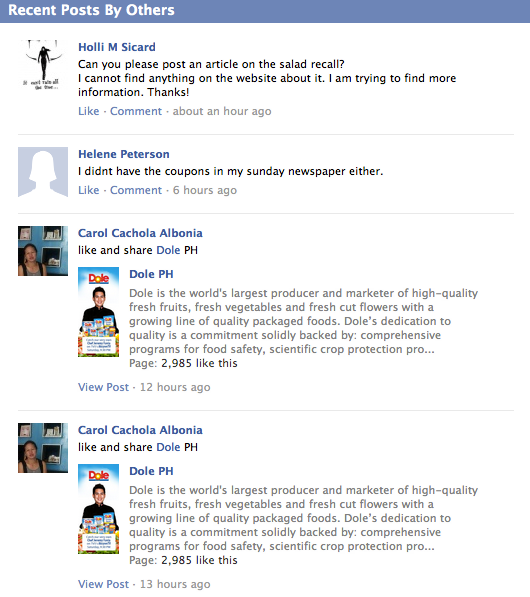 It took them until early afternoon on Monday April 16 to finally post about the recall. 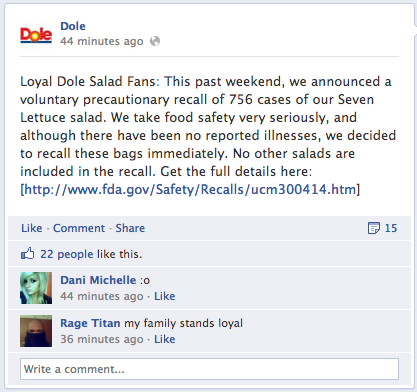 Sadly, Dole missed out on getting Twitter.com/dole. So the only way to find them is to do a search for “Dole Twitter” and see what comes up.

It turns out Dole has two Twitter accounts, @DoleFoods and @DoleNutrition. Neither was updated to mention the crisis. And neither had anything of substance in their Twitter bios. 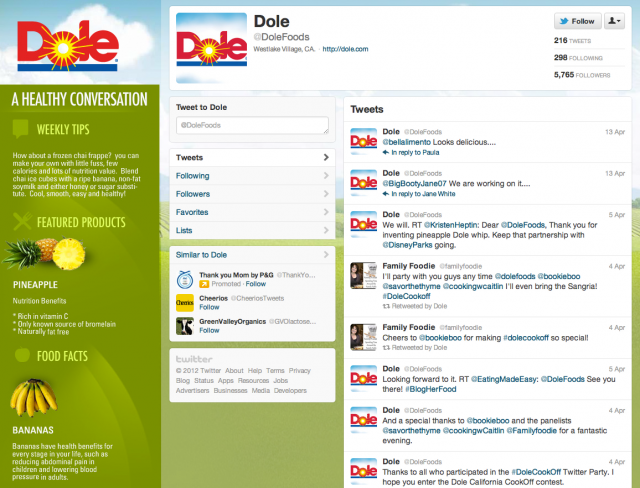 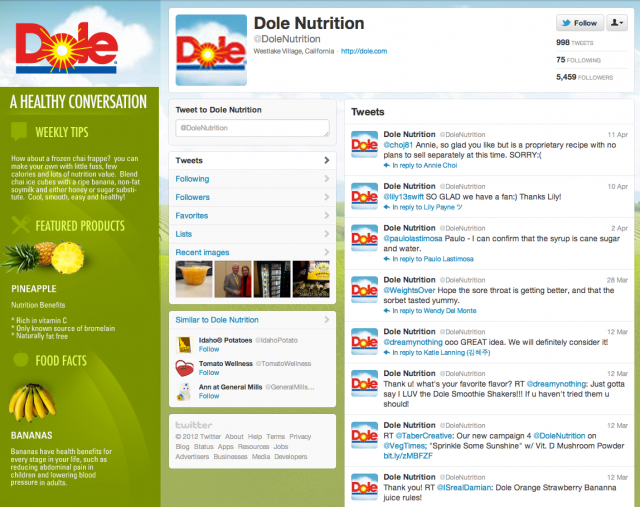 The only recent conversation was between Dole and someone asking about a mango-flavored smoothie. This is hardly life-or-death material compared to a Salmonella threat.

8. Are You Prepared To Respond On Google+?

The good news for Dole is, they at least have a Google+ Page (although it is debatable whether this is their “official” page or just one a squatter set up).

The bad news is, there is nothing on it and certainly nothing about the salad recall. 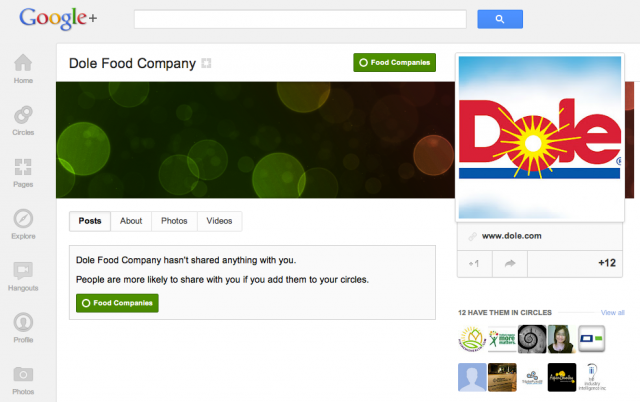 Companies — particularly big consumer brands like Dole — are using Pinterest and with good reason. Pinterest is new, but is already one of the most popular social networks in the US. It’s a great place for brands to enhance their following and stay top-of-mind.

So again, good news: Dole is on Pinterest (under Dole Nutrition, not Dole Food Company). They have about 20 boards ranging from kitchen gadgets to the requisite gorgeous food shots. But what they don’t have is any way to post newsworthy items of interest. 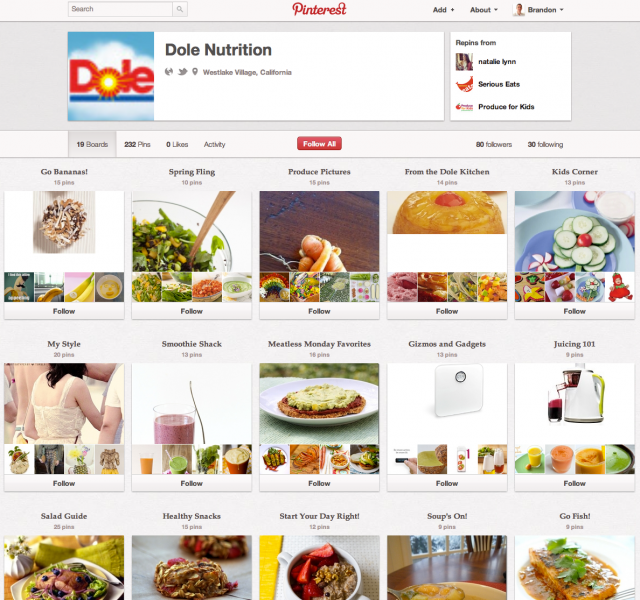 Answer These Questions Before Your Customers Need To

Dole slipped on the digital banana peel in this specific instance. Hopefully, someone at Dole HQ will read this and take some of these lessons to heart before the next time they find themselves facing negative public opinion.

Other companies need to heed lessons like this and act now to ensure they are not caught flatfooted when a crisis strikes.

Have you seen recent examples of companies that handled a crisis well using social media? Let us know in the comments.