Get Ready For the Live, 4 Hour Coca-Cola Super Bowl Commercial

Of the 100 million people watching the Super Bowl on February 5th, it is estimated that 60% will be watching with second screens.

Meaning the majority of people watching the game will be Facebooking, Tweeting, and browsing the web for chats, reactions, and more info on what they are watching.

So what is a big brand to do if they are dropping millions of dollars on a Super Bowl commercial when 60% of the audience might miss it because they are talking trash on Facebook?

To take their Super Bowl commercial beyond just the game, Coca-Cola has created a second screen experience that lets anyone watch the big game along with their famous polar bear characters. Along with Facebook, Twitter, Youtube, mobile, and digital ad integration.

There will be 3 commercials from Coca-Cola, two in game and one post game on ESPN. All three are clips are of the polar bears at their ice den Super Bowl party.

The second commercial (below) will run in the 2nd half and is a 60 second spot. There are two versions, one featuring each team’s bear, and the current action of the game will decide which version of the spot runs.

This will be the first time we see the Coca-Cola polar bears outside of the holiday season.

The commercials are good, but the experience is much more than that. Coca-Cola wants to embrace all of us using our laptops and iPads while watching the game. If you go to CokePolarBear.com you will be redirected to the game day Facebook App by Coke.

Leave your laptop, iPad, or second TV tuned to the bears and you will be able to watch them react to the big game as you do. This is not pre-recorded or pre-animated. The action is created as the game progresses live. 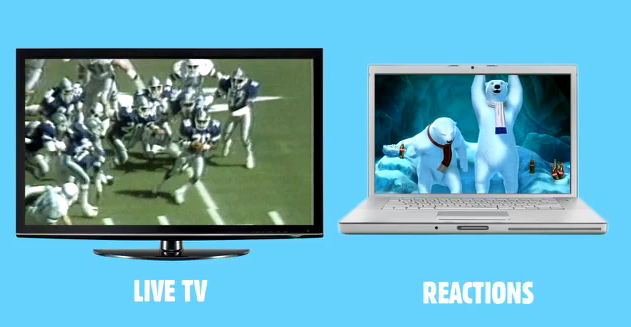 The bears will not have audio. The scene was meant to augment the Super Bowl experience with out overshadowing it.

The creators of this campaign at Weiden Kennedy had to record two employees reacting to a game live and then replay them to figure out the right timing. It turns out, for a second screen experience like this, an instant reaction is too fast.

Somewhere between a 4 to 7 second delay is perfect for those watching the game to look over after a play to see what the polar bears thought. Which is about the speed that the live-stream experts from MLB have perfected, helping as one of the partners with Coca-Cola for this campaign.

But, this second screen effort from Coca-Cola goes beyond just a simple animation.

Live Animated Reactions to the game

Sitting on their somewhere-in-the-north-pole ice couch, the two polar bears will each be rooting for their respective team and have their own personality. 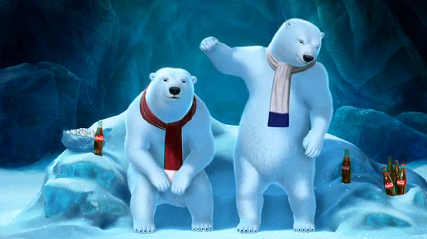 The polar bears will each be controlled by a single puppeteer. Weiden worked with video game animators to basically create live video game characters. They use video game controllers to give the bears a positive or negative demeanor and then apply “moves” to the bears. Certain buttons create reactions, laughter, applause, grimaces, etc. And many special scenes can be called instantly with the controller, like a penguin planking on two Coca-Cola bottles or another penguin trying to steal a Coke from the bears.

To truly make this an integrated campaign, Coca-Cola wanted everyone to be able to access the experience, which is tough for a campaign built around a live-stream. For laptop and iPad users, the livestream is available. For other smart phones, depending on the tech abilities of the phone, they will see a site that loads short video clips from the livestream or be sent to the Coca-Cola Youtube page, which will also share the same clips.

The polar bear second screen stream will be live on Twitter as well. When you click on a tweet with the livestream link, the embedded video will be able to be played directly on Twitter.com, the first time anyone has done this as far as Coca-Cola knows.

The polar bears will also be tweeting from @CocaCola as “NY_Bear:” or “NE_Bear:” at the beginning of each tweet. If you are watching their stream, you will see them actually pull out an iPad or a smart phone to send there messages.

They will also ask for fans to send them photos and messages that may be featured on the livestream. 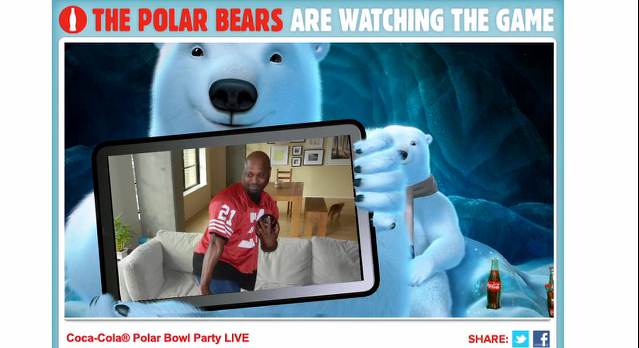 Coca-Cola will be editing short 15-30 second clips out through the game and allowing fans to share them as celebration opportunities or maybe trash talking creative assets.

And then post game, Coca-Cola will allow all fans to send a free Coke (coupon) as a reward for their friends or as a consolation prize, depending on their team of course.

What do you think, will you tune in?