Over the past 12 months, brands and publishers have evolved their social marketing strategies from engaging with consumers on social networks to socializing their own websites, mobile apps and even advertisements.

While most brands now view social media as more of an opportunity than a threat, the rapid evolution of consumer behavior has resulted in new avenues for brands of all types to tell their stories.

If 2013 was the year of social content, 2014 is the year of social context. Consumers no longer just want to be heard and entertained, they want to be part of a larger story. Social marketing campaigns can no longer live in a silo — in order to succeed, brands need to create a narrative around campaigns that blend paid and earned media, driving consumers back to their owned properties to learn more.

Why is tweeting for the best-dressed celebrity on the red carpet at the Oscars so enticing? You’re not just talking to yourself, you’re engaging with a larger audience through broadcast tweets or a behind-the-scenes social hub. The individual now becomes just as much a part of the story as the celebrity themselves.

This year we will see more collaboration between traditional “communication” departments and creative/social than ever before. While many brands struggled in 2013 to manage and create these types of integrated campaigns, new technologies are emerging that blend real-time conversation, social curation and social advertising in a way that leverages user generated content to scale content creation.

For brands this means making better sense of socially activated experiences, surfacing the most interesting content (not just creating it themselves) and building useful and entertaining “products” out of their campaigns. I like to call this the “Old Time Radio” model of advertising — creating valuable and entertaining experiences — presented by your favorite brand.

In 2014 content is currency, with consumers increasingly acting as contributor to their own entertainment. Whether your content is about a Grammy-winning album, a branded social hub curating the best stories from the BBQ, or an interactive news piece, this audience contribution will become the cornerstone of growing and maintaining relationships with users.

Below are some of the top minds in digital marketing today with their predictions on what we’ll see from brands in social in 2014.

“2014 is about one-on-one social connections and niche groups subtly replacing mass postings and one-size-fits-all social networks. The definition of social has gone beyond the concept of Facebook to messaging apps and conversations with tailored communities who share affinities for brands and specific content.”

“In 2014, we will finally see the end to “Social Media” as we have known it.  Facebook has already seen a decrease in organic engagement since their IPO and paid media has become more necessary in the noisy world of Twitter – we will continue to see brands more and more reliant on paid media to make an impact in the world of social.  The larger CPG companies will still make these places an effective medium, but it will continue to lose luster as the price to participate rises. As social becomes more pay to play – smart medium to small sized companies will reexamine the media mix to find the efficiencies that made social media the attractive playground in the first place.”

“Social media has won on quantity, building massive platforms that work in real-time on a global scale. In 2014, the major social networks will focus on quality. Many of the large platforms are turning to expert storytellers from across the media spectrum, hoping to attract the general audiences who don’t create media on their own — and draw the ad dollars that come with premium content.

This means networks will build better experiences to attract average people while also pulling higher quality media into their feeds. We’ve seen this happen already with efforts from Twitter to bolster its mobile app and “Discover” feature. Meanwhile, Facebook is increasingly emphasizing premium media sources in its news feed, rather than posts from friends. Other platforms like Medium have taken the high-quality path from the start, and are being careful to curate a high-quality experience even as the platform grows.”

“I think we’ll see social in 2014 becoming even more visual, with photos and especially videos increasingly prevalent, frequent and unique. I also think we’ll see increased use of and innovation around social storytelling from both everyday users as well as publishers, whereby everyday users are using social platforms to knit together and share a series of experiences, and publishers and brands will use them for reporting and messaging. Brands of course will continue to try to capitalize on memes, fads, and fleeting events on social media to position themselves as innovative and clever. And one final sense I have is that we are going to see a bit of exhaustion around content that created for the sole purpose of “going viral.” 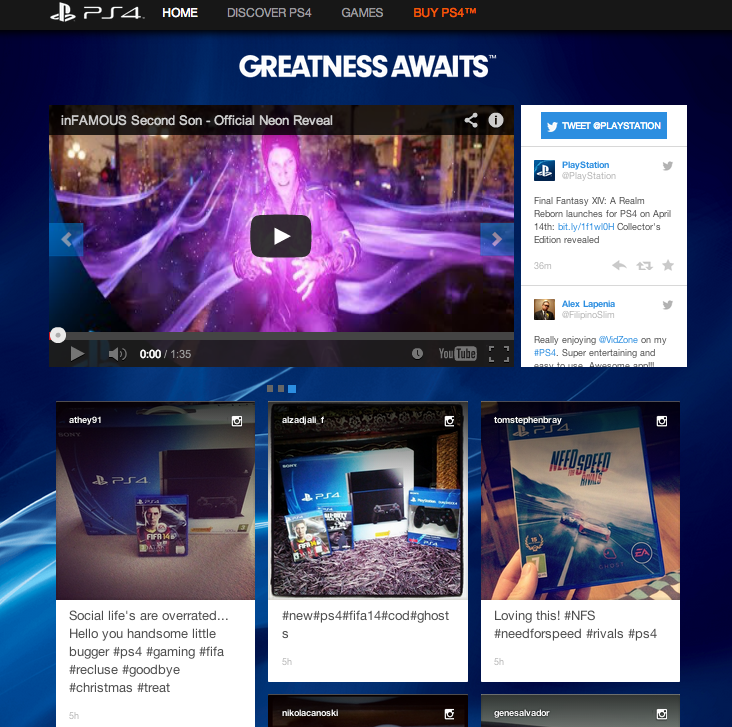 ← Retailers: Use Social Media to Engage Shoppers First, Then Focus on Selling 2014 Marketing Statistics Every CMO Should Know [Infographic] →