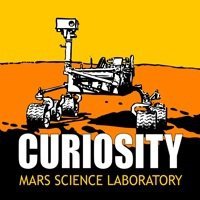 Staying topical on Facebook is one of the best ways to gain engagement from your page’s fans. Some brands are known for it and have multiple people assigned to fill their Facebook content calendars with original brand content.

We have seen this with the social media Olympics. And now that the United States has landed their 4th rover on the surface of the planet of Mars, brands have taken to Facebook with some pretty creative responses.

Oreo is always there to make sure their cookie says as iconic as ever. Their red creme filled Oreo shows the rover is already on the move and left some tracks behind. 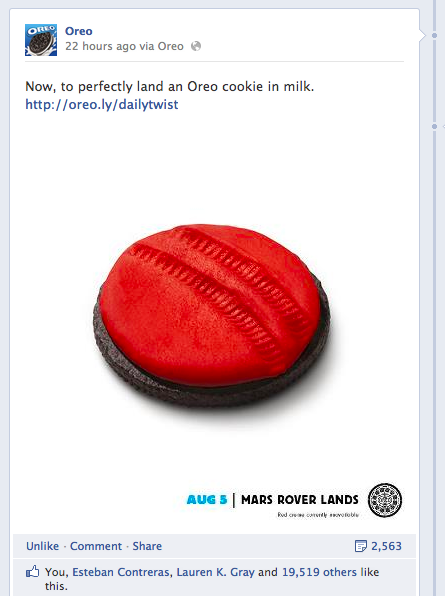 I laughed out loud when I saw JetBlue is already advertising Mars travel legs, beginning in 2052 “or later.” The tagline is genius: Bringing the humanity back to Mars travel. Looks like they have a big leg up on the competition here. And of course, the first checked space suit flies free.

Dr Pepper is just as good as Oreo at putting out very creative product art on their Facebook page. They were very thoughtful in thinking about the rover, and somehow, sent up a 36 pack “in case the little guy gets thirsty.” Also, great art. Maybe they did actually send it? 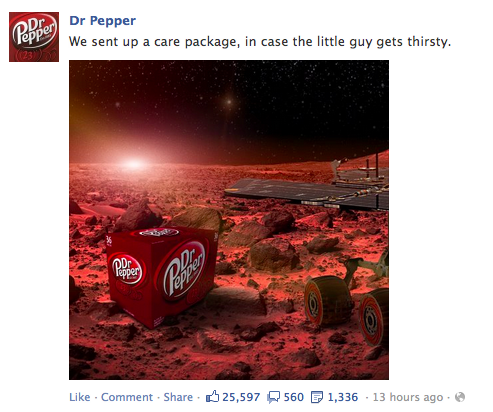 The Onion is of course always topical, as the world’s leaning fake news source. They were on the ball as well, sharing their take on the unique research gained from this trip to the red planet. 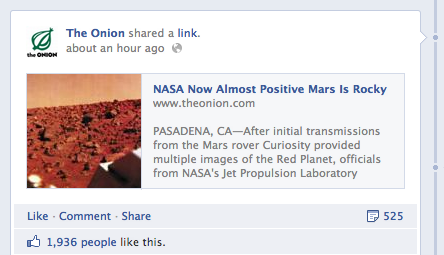 And of course, NASA has someone very clever sharing some actual first hand knowledge from the surface of Mars. There is no lack of social media chops with the NASA social media presence.

Did we miss anyone?