With over 500 million Tweets per day, Twitter is ripe for evergreen engagement opportunities ranging from the most basic levels of customer service to brand-altering moments that can change an organization’s future with a single tweet.

This week Simply Measured analyzed data collected by their analytics platform for Q4 on Twitter and found that 92 percent of companies among the Interbrand 100 post to Twitter at least once per day.

The Twitter study also analyzed the Forbes 100 Best Small Companies in America, finding only 28% of brands on the list average one or more Tweets per day, but still most top brands don’t engage With Twitter followers.

Do smaller brands feel choked out by the influx of larger brands to the platform since IPO late last Fall? In general marketers are currently in a bit of a turning point in their relationship with Facebook after they all but admitted that “organic reach” was dying and brands would need to start paying for more exposure, and it’s a tricky line to walk to satisfy both small business and large corporate advertisers equally.

“Twitter has become an integral part of the modern marketing organization, giving real insight that can impact meaningful business decisions. As the ad offering and organic engagement potential of Twitter continue to grow, it’s becoming more important than ever for marketers to measure and analyze the tactics they use, audience they reach, and effect of their efforts” said Adam Schoenfeld, CEO of Simply Measured.

You can download the complete study here, but some key findings of the Twitter study are below:

1. 92% of top brands Tweet at least once daily.
2. Favorites and Retweets make up 91% of brand post engagement

3. Over 36 percent of all brand Tweets contain links. As content marketing becomes increasingly important, and top brands are behaving more and more like media companies, Twitter is proving to be a critical distribution and engagement channel.

4. Audiences this quarter grew by 20 percent. More and more consumers are opting into receiving brand messages.

5. 98% of all top brands are active on Twitter. Of the Interbrand Top 100 Brands, 98% have Tweeted at least once during the last quarter, with 92% of those companies Tweeting more than once a day during Q4 2013. 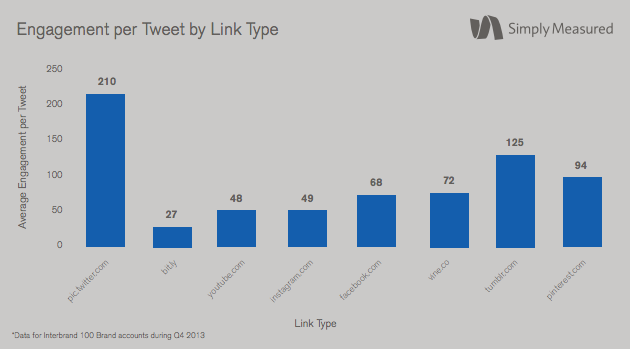 8. We think seasonally about our purchases, and internet decisions mirror that. Q4 is a goldmine for internet retailers, and as the results show there’s a strong correlation between brand engagement on Twitter and the seasons (specifically Black Friday and Christmas).

9. 54% of Interbrand Companies Send Less than one reply per day